Classic films at the Oriental Institute

Celebrate Valentine’s Day with a really old-time love story. This 1949 Cecil B. DeMille classic stars Victor Mature as the Biblical strongman and Hedy Lamarr as the seductive lady with the scissors who captivates and then betrays him. Don’t miss this spectacular, Oscar-winning sword-and-sandal epic. (128 min.) 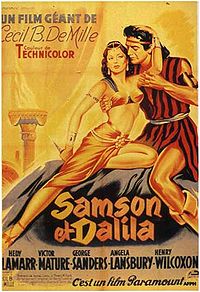 There may even be popcorn!

Also, in ONE WEEK there will be a showing of the first half of Lawrence of Arabia at the Oriental Institute.

Widely considered one of the greatest films ever made, Lawrence of Arabia brilliantly portrays many of the World-War-I-era luminaries that James Henry Breasted met on his historic expedition to the Middle East, including Faysal, King of the short-lived Arab State based in Damascus, Lord (later Viscount) Edmund Allenby, Commander of the Expeditionary Force sent from British-occupied Egypt, and T.E. Lawrence “of Arabia” himself. View this masterpiece of world cinema as it was meant to be seen on the big screen and see how it succeeds as an epic story of a remarkable man amidst a collapsing empire. Then discuss the historical significance of the era with Professor Fred Donner, who will introduce and provide commentary on the film. 108 minutes.

The second half of the film will be shown Sunday, February 28, 2:30-3:50 pm in Breasted Hall at the Oriental Institute