This picturesque town of Hillah is just on the outskirts of ancient Babylon. The view of the Euphrates shown in my Ancient Times was taken from the balcony just outside my bedroom door, and shows a corner of Koldewey’s house in which I am living. You must remember Koldewey. A new officers’ mess has been built abutting on this house and enlarging it, and here live the British officers of the local administration. Poor old Koldewey! It has all ended so differently from anything they could have imagined! The old Euphrates flows past my windows below the balcony. It is now only a branch known as Shatt Hillah (“River of Hillah”). 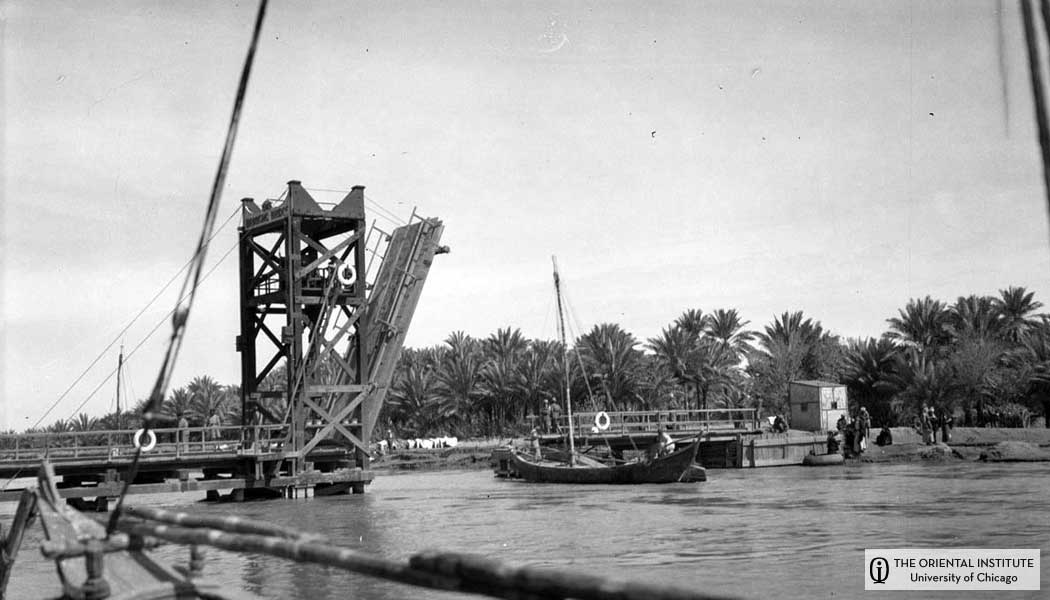 Hilleh: View of bridge over Euphrates showing section of bridge raised to allow boat to go through. (N. 3222, P. 6782) 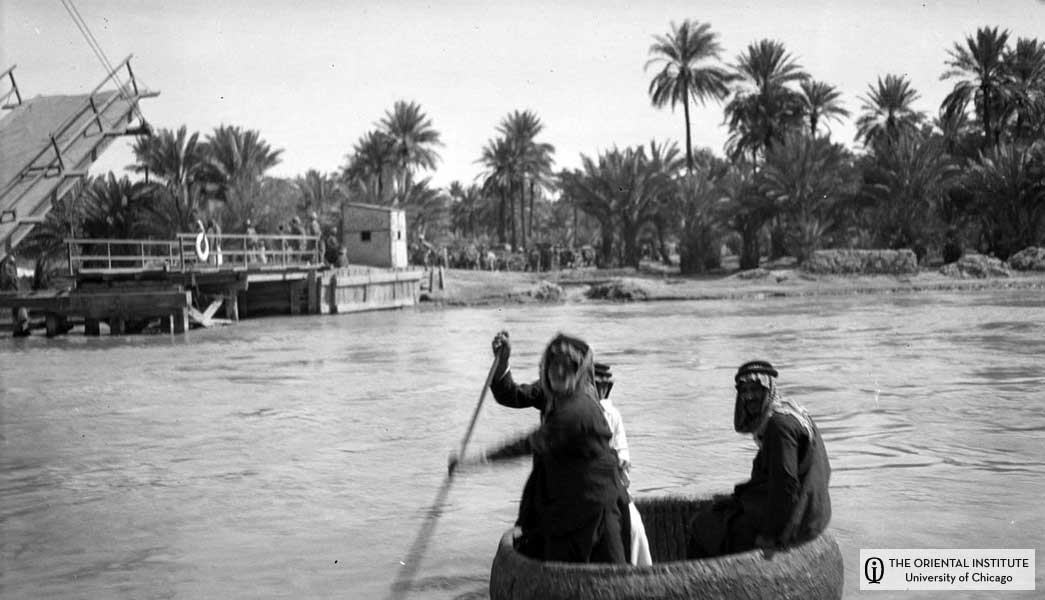 I must go back to Diwaniyah and our visit to Niffer, ancient Nippur. The town was the Abydos of ancient Babylonia, the greatest of the early religious centers. It was excavated by the University of Pennsylvania, chiefly under the field directorship of Haynes, who returned to American and died as a result of his devoted work here. We found his house, though in melancholy ruins. The buildings of the ancient town, chiefly the temple tower, are the most impressive we have yet seen in Babylonia.

Not less interesting than Nippur were the conversations with Major Daly, who took a Sunday off and drove us out in his own official car. He is the keenest and most intelligent of all the British officials we have met here, and he is in charge of the most important district in Babylonia. He is already collecting taxes amounting to 2-1/2 million Rupees, almost 1-1/4 million dollars. Yet when he took charge there were over 400 fortresses in the district, and tribal fighting, especially over irrigation, was incessant. The day he arrived and took over his post, a battle between tribes was going on many miles out. Daly inquired as to canals and finding none in the way drove out in a Ford vanette and suddenly appeared in this strange contrivance which none of the wild tribesmen had ever seen before. He drove between the firing lines and in a few minutes the tribesmen on both sides were crowding about the machine. On his calling their attention to the fact that he could always reach them in the new vehicle, both sides took the peace oaths and the fighting ceased. In the course of a few weeks he succeeded in starting a movement for demolition of the fortresses by showing he could right their wrongs much better than they could. Eventually one day he induced a well known sheikh actually to begin tearing down his walls. The falling fragments could be seen from the next fortress only a few hundred yards away, and thus it went on from fort to fort far across the plain. In a few days all were down, a state of affairs unknown for centuries. A few tribes refused the new arrangements. They are the kind of people for whom Mr. Wilson’s 14 points are admirably suited! But Major Daly for some reason failed to apply them! He found a bombing plane more efficient. He could go out 50 miles with his pilot and bomb a tribe, come back for the usual morning’s work at his desk; run out and give ‘em another after lunch and transact the regular afternoon’s business before tea, or postpone the bombing picnic until after tea, and return in plenty of time for a bath before dinner. The scattering on camels the first time he did this, said Daly, was very amusing. In two cases the tribal sheikh held out for 15 days and then yielded to the discontent of his tribe and came in and submitted. If such methods are condemned on humanitarian grounds, consider the alternative. The Arabs on the upper Daghara river “bunded”, that is, dammed and diverted the whole river, although they needed only a fraction of its water, and they turned much of it into a marsh. They thus laid waste a large district below, many square miles in extent, impoverished and starved whole tribes: men, women and children, and drove them out of homes they had held for centuries! …The automobile and the airplane are beginning to do what was attempted in vain for thousands of years by Babylonians, Assyrians, Persians, Macedonians, Romans and all the rest—the curbing and civilizing of the lawless Semitic or Bedwin nomads.

The same lawlessness prevailed in the towns. During Major Daly’s first month at his post, he was met practically every morning on his way to his office by the corpse of a murdered man, brought to him by the victim’s relatives for redress. These almost daily murders in one village represented the normal conditions under Turkish sovereignty, which was purely nominal, leaving the Arabs to fight things out among themselves, because Turkish control, was too feeble, timid, and corrupt to restrain the Arabs at all, or even to collect any taxes except at intervals of many years. A Turkish official did not dare appear on a street alone, or go out among the tribes even with a strong Turkish escort. Such a Turk was merely a local vulture legally authorized to plunder the people for filling his own maw under pretence of collecting taxes. It was not uncommon for a local Turkish official to have his throat cut. Daly found it impossible to let a particularly atrocious murder pass, especially as he discovered that he was himself marked as a coming victim! He had no one to help him, but turned a clever bit of Sherlock Holmes work himself and found the murderer,—one of his own leading native police. Sounds like New York and Chicago, doesn’t it? Daly at the same time got the goods on two of the murderer’s cronies as the guilty ones in another dreadful murder. Imagine the hardihood of the first murderer, who sauntered in casually and reported finding the body of the victim in the street, just where he had himself dragged it under cover of night. Daly tried these three gentry and hanged them publicly. Murders stopped at once, the decent people came and thanked him, all has remained quiet and orderly ever since, and Daly is sovereign lord of the whole community.

At present he is very busy on a large irrigation project, the enlargement of a 16 foot canal to a width of 80 feet! It is 7 miles long, and the job is therefore not only to make an excavation 64 feet wide and 7 miles long, but also to shift 64 feet away a huge embankment stretching along one side of the canal. I saw 14,000 Arabs engaged on this job distributed in tribal levies along the entire 7 miles, each levy furnished, fed and kept at work by the tribal sheikhs. A few months ago these 14,000 wild men were engaged in cutting each other’s throats, as a result of ceaseless quarreling over the distribution of water. Now they are all delighted at what is being done, and have no desire to fight. Daly took me in his car along most of the canal line to inspect the progress of the work. It will take only a few weeks, probably 3 to 4, and will be ready for the present flood. The natives greeted Major Daly everywhere with wild enthusiasm. He had only to lift his hand and shout, and all the men within hearing would run together in a huge circle, trotting round and round in a fiery war dance, brandishing their long spades high over their heads in lieu of rifles, and shouting the refrain of a rhythmic war song with such improvised words as: “Daley has taken our rifles”, a reference to his recent disarming of the whole population, collecting over 20,000 rifles. For miles we went up and down the canal and started this war dance, known as a “hausa” (Arabic word here). Daly says that after a few minutes of this, a gang of men will work very much better all day. Such are a few of the incidents in the transformation of this decadent land at the hands of the British.

We left Diwanieh and our friends the Daleys with great regret. There is only one train from Diwanieh to Hillah. It is only a little over 50 miles, but it takes nearly 4 hours as the train arrives at Hillah long after midnight. Telegraphic notice of our coming had been sent both by Daly and myself, and the Hillah Political Officer had been notified also from Baghdad. Unfortunately the Political Officer himself was away on vacation. We learned afterward he deputed a certain Captain Outlaw to look after us, and this well-named individual allowed us to arrive with no one to meet us, and no transportation to a night’s shelter. After the train moved out we looked up to the brilliant Babylonian night sky, bright with a radiant moon; and the cold night wind admonished us to seek a warm corner,—in vain. Nobody knew anything. I finally found a young British officer who told me there was a car to be had in the neighboring railway camp of the constructing engineers. All was still as the grave,—the palms threw long shadows in the moonlight, and the stars twinkled through the dark palm-crowns, massive and somber against the sky. Suddenly we were challenged by a sentry, as we approached their tents. My companion quickly answered “friend”, and we entered the group of tents. We were unable to rouse anyone, but found a large empty tent, which I determined to requisition. We found some sleeping porters who carried our bed-bags and kit-bags over, and by the light of a lantern soon set up our beds, and turned in about 2 a.m. In the morning one of the engineers appeared at our tent-door and introduced himself by saying breakfast was ready in the mess tent! After breakfast he and his assistant, a young Canadian lieutenant, drove me into Hillah in a Ford vanette, where I soon found the Political Officer, a Major Pulley. He very much needed oiling. Our papers on his desk had been there so long that he had forgotten them. I could see that although he was perfectly courteous, the initial impetus given our expedition by the good offices of the Baghdad government very much lacked some new steam. So I telegraphed to Major-General Hambro in Baghdad and had a reply at once putting a car at my disposal, and I think we shall now get on all right. We were given quarters in the Political Mess, as it is called, — a term strangely suggestive, at this juncture, of the situation of the Allies, and everybody else for that matter.