We have had our visit at the mound of ancient Kadesh! I will not attempt to tell you of the place for that would make my letter an archaeological report; but I am sure you would have been greatly interested in following the plan of the first battle the strategic of which is known to us. The tell or ancient mound is a matter of a quarter of a mile long, and lies in the midst of a level plain surrounded by the splendid ranges of Lebanon and Anti-Lebanon, as I mentioned last night. Both are at present crowned with snow and offer a fine prospect. A modern village, largely of houses built of blocks of basalt surmounts the mound, which is probably over [a] hundred feet high at the highest place, the north end. The chief man of the village insisted on our coming into his house, where he served us an excellent lunch of omelette in olive oil, hot bread, fresh unsalted butter with honey, plenty of milk and curds. The service left something to be desired, but the food was delicious, especially the bread, with butter and honey. 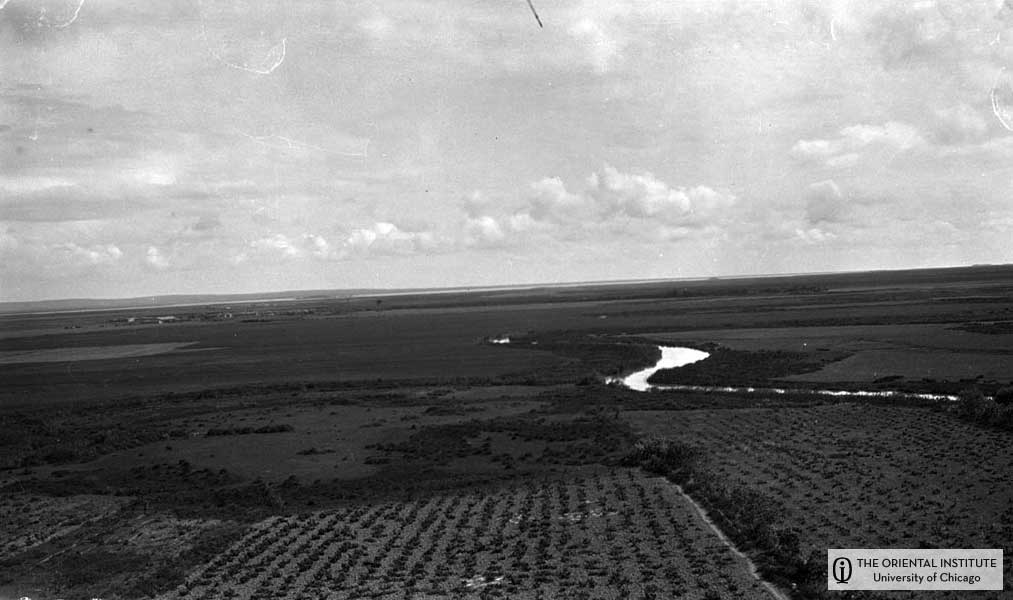 Kadesh (on the Orontes): A view looking northeast from the summit of the mound near the north corner; showing the Orontes. (N. 3939, P. 7499)

There has been much questioning, and evidently some doubt about us. I think some of the natives suspect we are French, but do not venture to treat us as such. When I came home from the awful dinner last night, I was accompanied by two drunken soldiers, who were very familiar, and at one time I thought they were going to make me trouble. The dinner was the first native dinner I have had in Syria, and differed greatly from the Bedwin dinners we have had in the desert; but I will not describe it here more than to say, that I was led out from a very solemn assembly in a lower room, to an upper chamber, where I found the mudir and the commandant sitting around a small table with five other Arabs, all eating from seven little dishes of hors d’oeuvres, and drinking arrac. I was supplied with a small glass of this delectable beverage and at short intervals was fed with a fork with tid-bits from the small dishes, — the said fork meantime having been pushed into sundry other, native mouths before each push into mine! After a long session at this interesting sport, we adjourned to a lower room, where I joined the solemn assembly I had seen there before. They told me of a native who had had his horse stolen by a French soldier, and there was much weighty discussion of the outrage. Then dinner was announced, and I was taken to the next room to sit at the head of a table bearing a whole roast sheep, much boiled rice, fried meats, bread, and various milk dishes. They supplied me with a plate, and then the grabiola began as usual. The food was delicious, and I had a wholesome and nutritious dinner. We then promptly rejoined the solemn assembly, most of which took our places at the dinner table, while a low table was brought in for us, and spread with several dishes containing an excellent milk-rice pudding, rather over sweetened. After coffee, I begged the mudir to excuse me, as I would be obliged to rise very early next (this) morning for the ride to the Kadesh ruin. The whole company gave me a friendly good-night, and I went across the dark plain of Kadesh to the distant station, accompanied by the two drunken Arab soldiers, I have mentioned. They nearly knocked in the door of the freight car, where the boys were sleeping, and waked them all up. The field bed I had spread in one end before leaving, was welcome, I assure you.

We were a little slow getting out this morning, and it was 5:00 o’clock before we had reached our horses. There were the usual oriental delays, but a little after six we had reached the Kadesh mound after a wonderful ride across the Plain of Kadesh in the light of dawn. Our survey of the place went on without incident, but every body assured us we must have some soldiers with us, to ensure our not being mistaken for French and shot by the Arabs! We finished earlier than I had expected, and after our lunch at the house of the village head man, as already mentioned, we started back with plenty of time, which was lucky; for a heavy series of showers drove over Lebanon from the sea (west), and we stopped at an old mill on the Orontes to escape a wetting. As we sat in the door of the mill looking up at the village, a large crowd of natives poured out and descending the slope approached the mill. I was wondering what they were about, and what they wanted, and having done so out loud, I discovered that Ludlow was quite concerned and anxious to return before they reached the mill, although it involved a wetting for us all. When they finally arrived they proved to be a harmless body of reapers, men and women, going to mow the grain in the neighboring fields. 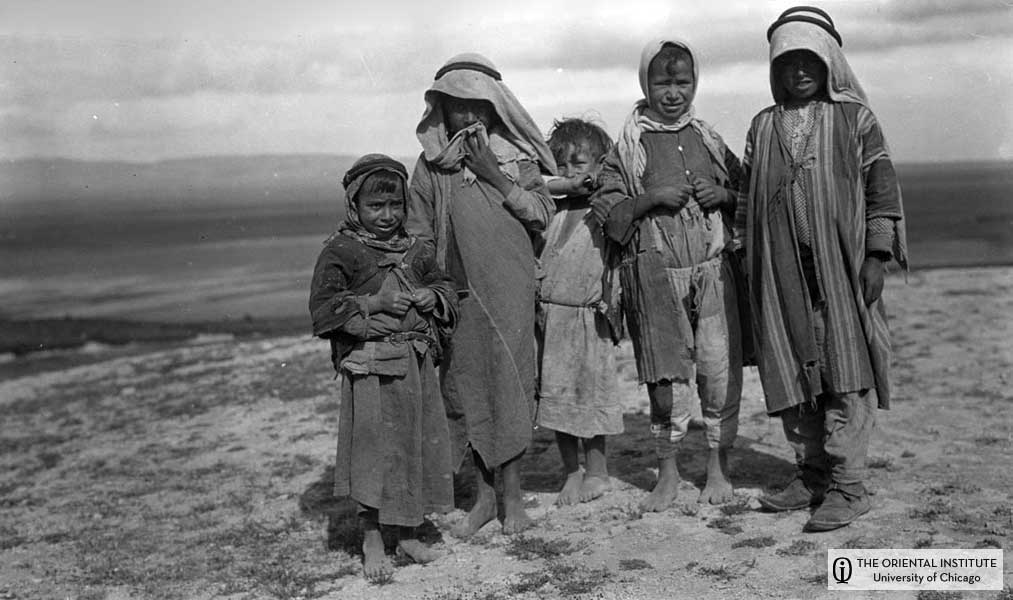 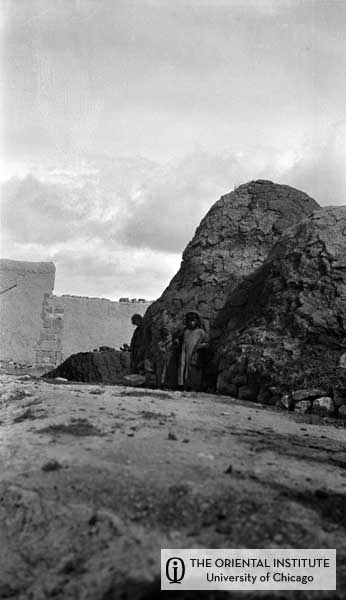 I am sitting in the office of the chef-de-gare, where he has given me a corner of his table but train time is now approaching and I must stop. We leave here for Baalbek, and tomorrow night move on, over Lebanon to Beyrut, where we shall sleep for the first time without any apprehension of trouble. I have had a wire from Nelson, and he is arranging to put us up at the college.

I am tired to death and it is nearly dinner time, but I must put in just a line before we cross Lebanon tomorrow and look down on the Mediterranean. It is just two months today since we left Basrah to begin our travels in Western Asia, and I would have found it impossible at that time to believe that we should have completed the inland and have returned to the Mediterranean in two months. It has been a wearing, nerve wracking experience, and it will be an enormous relief to realize tomorrow that it is all past except some examination of the Phoenician coast, which will not take more than ten days, and will be made up of short excursions north and south of Beyrut. A student of Nelson’s on the train gave us the distressing news of the death of Dr. Howard Bliss. I hope this may not interfere with Nelson’s going with us on these trips.

We were unable to find room in the first class carriage at Kosseir, and there was no room in the baggage car for our stuff. So the station-master, whom we had quite won over, put our stuff in a freight car, and we all jumped in with it. This quite shocked the two official worthies, the mudir and the commandant who had come down from the village ostensibly to see us off, but in reality to have their pictures taken. You should see this precious pair, especially the commandant. One of the most ferocious pirates, with a terrifyingly long black mustachios, and a huge overhanging eagle nose,—such a creature as you might deck out to be a bad man in the pirates of Penzance,—that was our worthy commandant. And both of them so pleased to have their pictures taken that they beamed with delight, and the pirate swung up his huge scimitar and looked his terriblest as the camera clicked him off. We promised to send them some prints from Beyrut, and I hope we shall not forget it!

We waved them good-bye as our freight van moved away, and presently as we opened the big side door, we were having magnificent views of the imposing valley between the Lebanons, and we forgot all about a freezing cold night in a freight car at Kosseir, in the enjoyment of all that was spread out before us, just as I could see it had expanded before the greedy eyes of Ramses II and the other Pharaohs who plundered this region over and over again. As we rose to the Buq’a, the high basin between the Lebanons, we had the snow peaks on both sides “and it grew wondrous cold”. Poor little Ali huddled in his bedding, and we felt much like doing the same. We left Kosseir at about 2:30 and at 5:30 we discerned one of the superb colonnades of Baalbek. I look out in the evening light from my windows and I have the wonderful temple ruins rising before me against a background of the snow peaks of Lebanon. And behind these peaks is the Mediterranean, which we will see again tomorrow night! 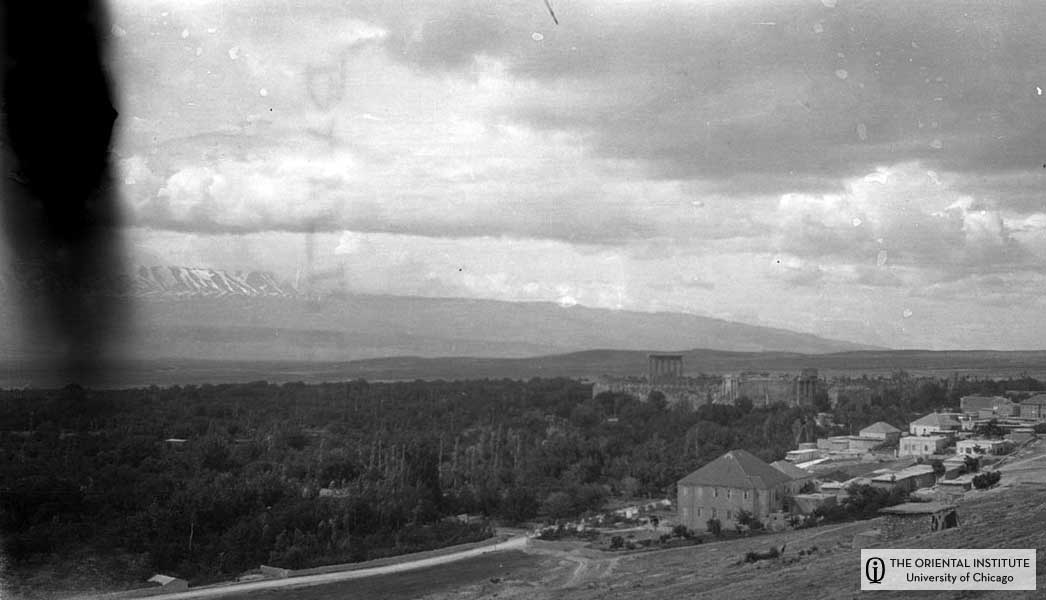