Yesterday we undertook our trip southward along the coast. I had called on Chamonard, the archaeologist of the French government here. He was very courteous, and promised every assistance. I found to my regret that Count de Caix, whom I had met in Cairo, and who promised to give us every facility here had just left for Paris, and will not return until after I am gone. I also learned that Admiral Knapp, who is High Commissioner of the United States at Constantinople, had just been here in his flag ship. He dined with General Gouraud, the French High Commissioner, saw the missionaries and left while I was on the northern trip to Tripoli. When he learned I had just come through overland from Baghdad he was very anxious to see me, but he had gone when I got back. I would have been glad to be useful to my own government, for I have never had a chance before.

In the evening I had a note from Chamonard saying he had telegraphed the French commandant at Sidon, asking him to take note of our coming and advise us whether it would be safe for us to go southward from Sidon to Tyre. He also sent me a map which I had asked for. Early yesterday morning we drove off in two Fords toward Sidon, which we reached without accident. It is about 30 miles down the coast, which is not so bold or rugged, nor by any means as beautiful as the coast northward. A police official nabbed our two cars at once and claimed a local tax of one pound each, which had to be paid before we could proceed. We then went on to the fine large mansion of Dr. George A. Ford, who was born here in Syria and has been a missionary here all his life. His house stands outside of the city in the ancient Sidonian cemetery. 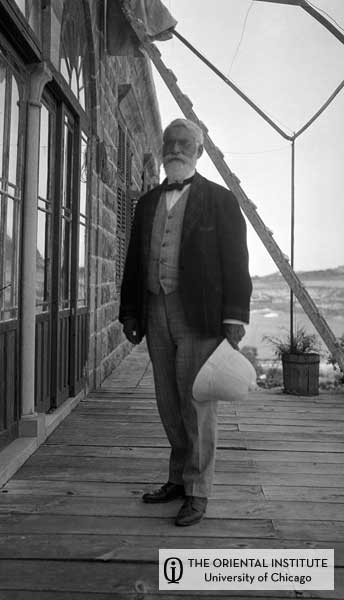 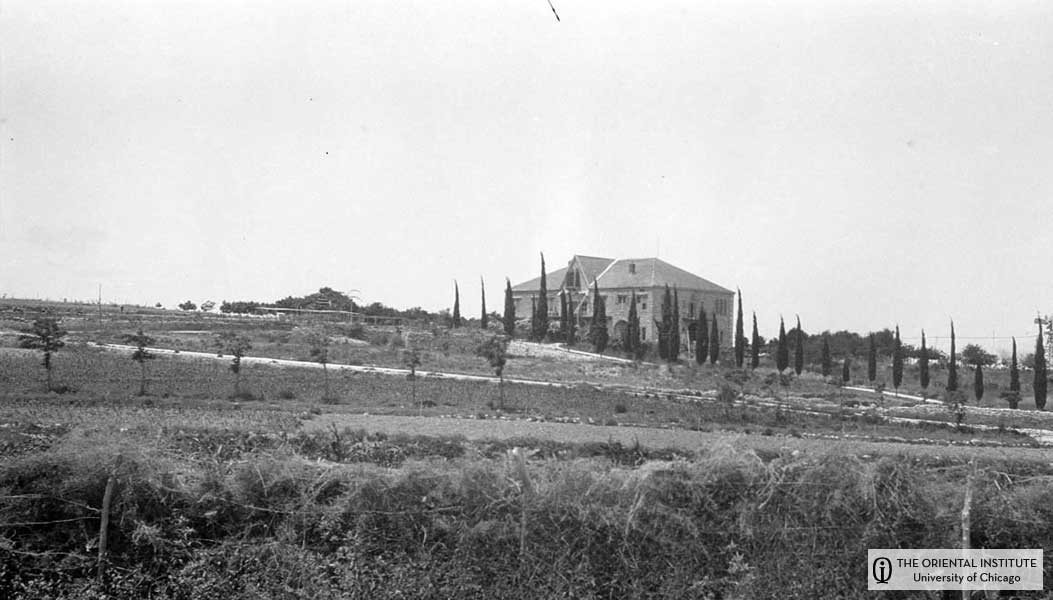 He has himself excavated many of the tombs which surround his house. You don’t see any superstructure for they consist simply of a shaft with a burial chamber at the bottom. It was in one of these Sidonian shaft tombs that the magnificent Alexander sarcophagus, and the other of the mourning women, were found. It was of course a very interesting place to visit. A great number of tombs still remain to be excavated,—many of them on land owned by Dr. Ford, and he would be glad to have us come and clear them out. From those which he has himself excavated, he has gathered an impressive collection of anthropoid sarcophagi hewn in Greek marble, about thirty or more in number. He has also the torso of a Phoenician king, wearing on his girdle the royal uraeus serpent of the Pharaohs. Very notable also is a kneeling bull in stone, part of a capital like those from Persia in the Louvre. It could be made into a beautiful museum piece. Dr. Ford wants $25,000 for the whole collection, as a contribution to the orphanage of the mission at Sidon. This mixing business and philanthropy is not the best way to handle the transaction; but the collection is very cheap at this figure because Dr. Ford has no acquaintance with the huge prices which the last 25 years have gradually seen coming in. Curiously enough, Dr. Ford is an old college friend of President Judson’s and showed photographs of his collection to President Judson last summer just after I left. I am hoping we may be able to secure these things, which would make a wonderful Phoenician room for our museum, quite without parallel anywhere, but unfortunately the museum of the American College here would like very much to have the things, though they have no money in sight for them at present. Nevertheless Harold Nelson expects to make it the first order of business on his arrival in New York, to see if some American friend of the college will not purchase the collection and give it to the college. The college will not stand in our way, if they fail to find the money, and I think if we can move quickly, and put the college in the attitude of standing in our way, we can secure the collection without difficulty.

In Sidon I called on Charpentier, the commandant, and asked him what he thought about our proceeding southward to Tyre. He said at once that in spite of the cleaning up which the French had been putting through, and which I mentioned above, there were still brigands infesting the road to Tyre. He said we might get through without accident, but that there was great danger. A few minutes later at Dr. Ford’s house we met the local officer of the American Relief Committee. He told us three men had just been shot by brigands on the road to Tyre! We decided that the climate on the road to Tyre was not favorable to archaeological researches, and hoped that it might improve before our next visit!

Dr. and Mrs. Ford kept us to lunch, regaling us with stories of solemn warnings from the American Consul at Beyrut, who insisted they should move to Beyrut, or at least leave their house outside the town and live in Sidon itself. Every native along this coast from here to Egypt knows Dr. Ford and knew his father before him, so he has no fear, and cannot of course listen to the admonitions of an American Consul, not very familiar with the situation. On the way back we visited the scanty remains of a temple of Eshmun, the only surviving portion of a building of any extent in all Phoenicia. 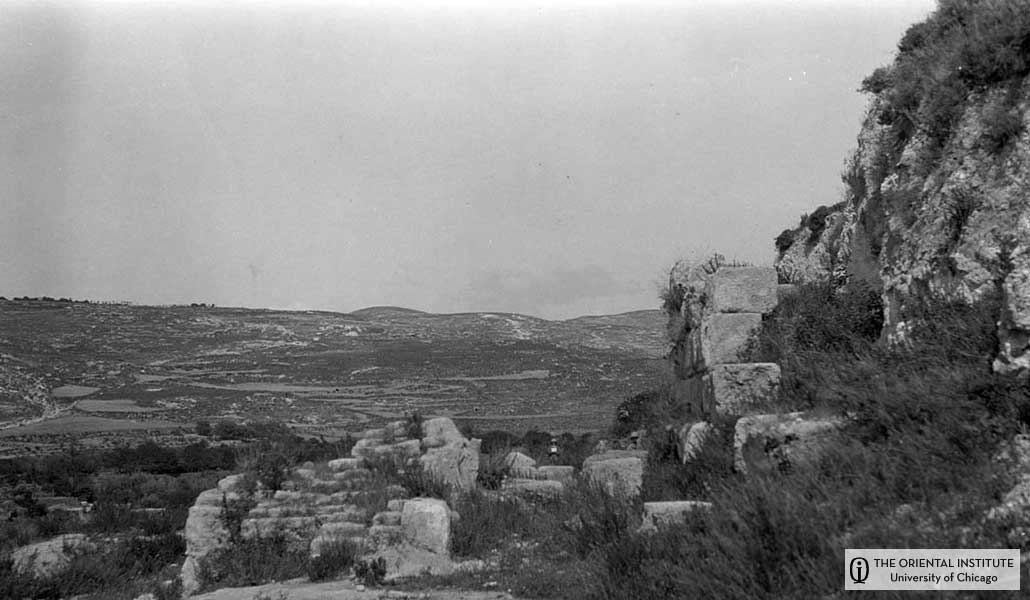 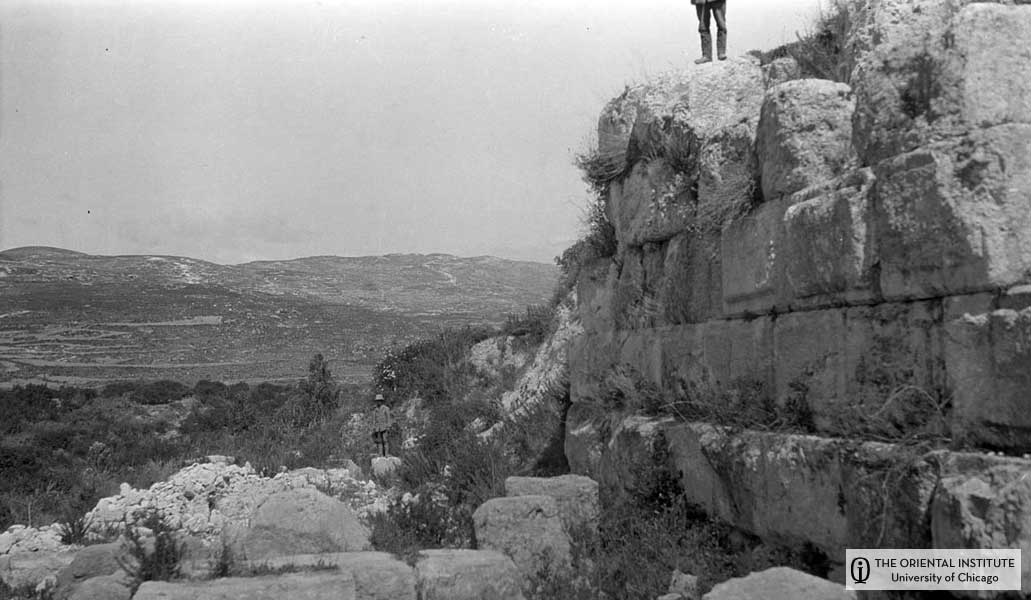 Sidon: Interior of the temple of Eshmun, looking east from altar and showing walls of platform at the right. (N. 3358, P. 6918)