I wrote you a hasty line begun at the hotel in Port Said and continued briefly on the ship; and another, a somewhat long letter written in the Canal and posted at Suez. I hope you have duly received them along with two cards for the children.

We passed out of the Canal during the night (last night). It is over a hundred miles long and it usually takes at least 12 or 13 hours for the passage; but if there is much delay passing other ships, it may take as much as three days. 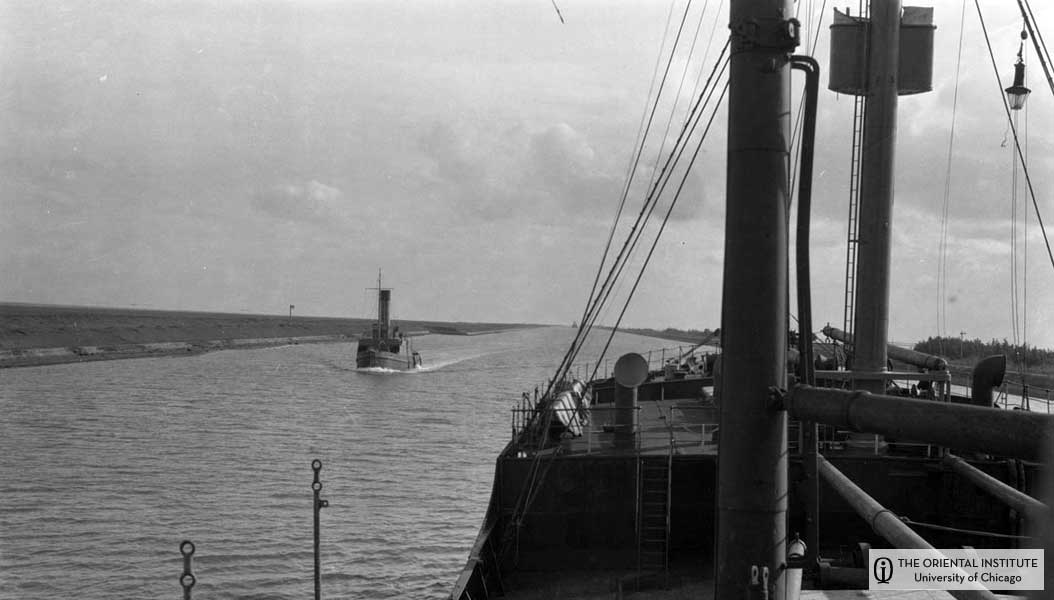 I have never been through the Canal before, as you know, and I naturally found it interesting to pass or rather cross the line of march of the Pharaoh’s armies in Egypt’s great campaigns in Asia, — the road along which so many armies of Egypt and Asia have passed back and forth for thousands of years. All day we have been sailing down the Gulf of Suez, which is over 170 miles long.

Philips’ map which I ordered for you will not enable you to follow our voyage down the Red Sea, but gives you only our area of exploration in Western Asia. If you will take the map in my History of Egypt you will see the copper mines marked in Sinai and will understand what an epoch-making region this has been, especially if you have been reading my Hale Lectures. As we passed down the Gulf we had on one side the fine jagged ridges of the desert east of Egypt, and on the other the great rock masses which rise skyward above the desert of Sinai. Along the Egyptian side the highlands are broken now and then by wadis and depressions through which the earliest Egyptians reached the Gulf of Suez. The greatest of these is the Wadi Araba. Along the low shores afforded by these wadis the Egyptians built the first ships that sailed the Red Sea. To look out on these rolling waters today, stretching blue and boisterous between the desert mountains on each side, and to realize that the earliest men to navigate salt water were able to organize caravans bearing water and provisions and build craft that would carry these supplies and the people who used them across the broad Gulf to the burning waterless wadis of Sinai, is an impressive experience. At noon today we had Mount Serbal and Gebel Musa rising grandly behind the rock bound coast of Sinai. It was good for the soul to hear the first officer devoutly explaining to a passenger, that yonder was Mt. Sinai where “the sermon on the mount was delivered”!

A little north of Serbal is the Wadi Maghara (see history map) where the earliest known copper mines still survive, and all about them the inscriptions of the earliest kings who ever carried on such an enterprise. And here we were sailing down the waters which had been crossed by these kings with their earliest ships to gain access to these mines. It was from these operations that Europe first received knowledge of metal and learned to use it. To the people on this ship, many of them missionaries, the traditional training of church-going folk in America made Sinai sacred and impressive as the place where a great moral code had been delivered; but as a matter of historical fact no one knows where the Sinai of Moses should be found, and the copper mines of Wadi Maghara have affected human history far more profoundly than even the traditional events connected with an unidentifiable Mt. Sinai. For there never would have been any civilized Europe to receive and profit by the Mosaic Law, if the Egyptian Pharaohs had not discovered and mined copper in the peninsula of Sinai.

As I write the ship which has been moving along on an even keel, begins to roll for we are leaving the Gulf of Suez and entering the broader Red Sea. I thought this was a new American Line, the result of the war, but find it is made up of two English ships merely shifted to a new schedule, and plying between New York, and Calcutta, via Bombay. It is a small ship, with primitive arrangements and limited comforts. I am in a three-berth room with Luckenbill and Bull. The room is fairly large, outside and has two port holes, so that we are able to secure fresh air. The food is fairly good. There is plenty of rice. It appears in some form at every meal, and I am living on it. The servants are all East Indian boys in quaint costumes. Our boy brings us tea, toast and fruit every morning, to be disposed of in bed. Then we go tandem to the bath, and shave in similar succession, Ludlow bringing up the rear. We are not permitted to breakfast until 9:00 o’clock, in order to give the officers a chance to breakfast first, for the dining saloon is not large enough to accommodate officers and passengers at the same time.

As the ship comes straight from New York we find many Americans on board, chiefly missionaries going out to India. Among the passengers is a government physician, Dr. Chalmers (who knew a number of my friends and had read my books, being a discriminating person), traveling with his wife and a young girl they are chaperoning, on their way from the Sudan homeward for a holiday in England, which they expect to reach by way of Japan and the U. S. These people, together with our group and Mrs. Warren, form the nucleus at our table. I was so weary when I came on board that I looked forward with apprehension to being obliged to talk willy nilly to a table-full of people; but I had a fine long nap this afternoon, and I feel so rested that I rather enjoyed the conversation; for I can transform myself into a listener on occasions by energetic application of will power.

It is 1310 miles from Suez to Aden and 1650 miles from Aden to Bombay, making a total voyage of over 3000 miles, including the canal. From Bombay we have again a voyage of nearly 1600 miles to Bosra, or Basra as you will find your map spelling it. It will take us 10 days from Suez to Bombay and six days from Bombay to Basra, perhaps five if we get a good boat. The captain informs me that we shall not have the slightest difficulty in securing transportation from Bombay to Basra, and if there should be any difficulty I have in my pocket a letter from Allenby to the Military Transport in Bombay which will certainly carry us on. The captain also informs me that when we return we shall not have any trouble in securing berths back to the Mediterranean. This is a great relief to my mind, for the situation of transport in India has been so bad that I feared we might be held up for weeks on our return.

It is now quite evident that we shall be returning by way of the Persian Gulf and Indian Ocean, instead of by Syria, as I wrote you was revealed to me by the confidential French Army report which Lord Allenby showed me. This of course quite upsets the itinerary which I long ago sent you, providing for a march from Mosul to Aleppo, and thence up the Orontes to Beyrut.