We entered the tropics last night and this morning we were in latitude 20 N, having passed Mecca and Medina before sunrise. The temperature of the sea is over 70 and before breakfast that of the air was 78. I shed my winter underclothing; for I must confess that the last week in Cairo I put on one of the heavy union suits of Charles’ which you put into my trunk. The trouble with a winter in Cairo is that you sit indoors with a temperature of 48 or 50, — that is a much lower temperature than we ever have indoors at home. Life was misery during the last fortnight at Cairo, and when Luckenbill succumbed and put on his winter underclothing I surrendered also. But such clothing is unnecessary in these waters. Tomorrow I shall put on a white suit. I have only one with me. I could not bring my silk suits, as we are stripped for caravan transportation and there was not room; but I have the alpaca or mohair suit which you made me get just before I left, and I expect it to be very useful.

We have settled down into the routine of life on ship-board in the tropics. At seven-thirty the Indian steward brings in tea, toast and fruit, which we three, Luckenbill and Ludlow and I sit lazily up in bed and devour. We then go tandem to the bathroom, and shave likewise tandem. There, — having written the other side of this sheet two days ago, I have repeated some valuable information I see, — for I failed to read over what I had written before beginning again tonight. After breakfast I try to find a quiet corner with a table where I can go on with my list and invoice making, in order [to] have my papers and accounts in shape to date. But a quiet corner hardly exists on this ship. The dining room is constantly needed for preparations for the next meal, the music room or saloon is not as big as my bedroom, and the smoking room is an impossible place, little larger and filled with intellectual persons playing bridge, drinking whiskey and soda, and talking refined English. In the afternoon immediately after lunch I can indulge in a good long nap, a luxury I have not known for many moons, and then walk a little till tea at four. After Tea the expedition plays deck tennis, a game introduced by Ludlow. It involves mild exercise and is quite good fun also. I am supposed also to be in a shuffle board tournament, in which I have played one game. Then I read a grammar of modern Syrian Arabic, in which I recognize many old friends, and at seven we have dinner. We usually go out and inspect the stars after dinner for a while, and it is quite interesting to see the heavens change as we go south, just as we once did in the Sudan. Last night I discovered the Southern Cross for the first time, and tonight as we went out for our usual star-gazing, the outmost star in the handle of the Dipper was lost below the horizon, for you know the Dipper stands on the handle in these latitudes now.

But to resume our itinerary where I left it when I stopped writing Thursday evening, — I think it now looks about like this. We shall reach Bombay, Sunday, a week from tomorrow, that is February 29. 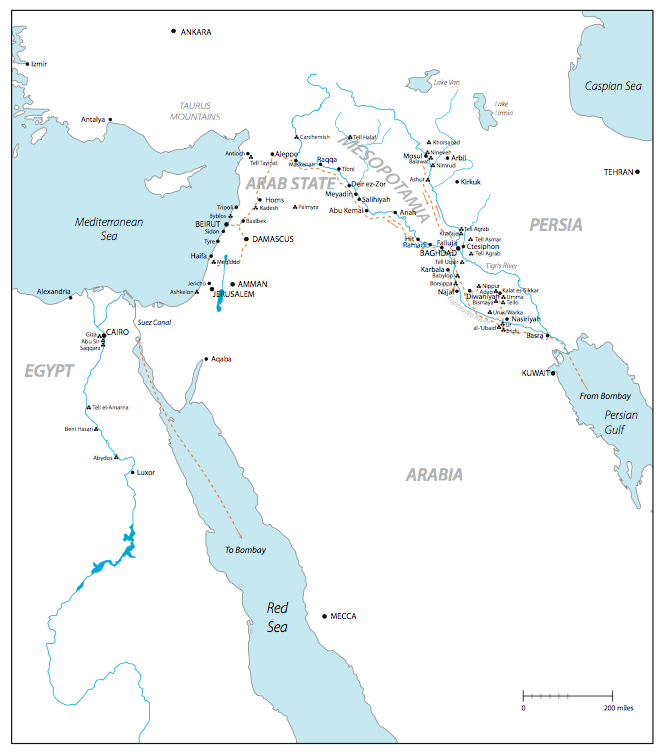 I have allowed a good deal of uncertainty in these dates after Bosra. And after we reach the Mediterranean again, it is quite uncertain that we shall be able to run north to Aleppo and explore the Orontes valley as we had hoped. I regard the whole Syrian portion of our journey as far the most important, and you can imagine our disgust at the fact that the whole trouble which is keeping us out, and making work there probably impossible for perhaps years to come is the French occupation. If we can explore the coast under the guns of British cruisers we shall be fortunate, and as for the inland, the Orontes valley, I fear all that is out of the question. The war has uplifted us all with its revelation of the myriad of heroes with whom we have been unsuspectingly living; — and now the peace leaves us or at least me aghast at the number of fools with which the world is filled. And having thus relieved myself I will explore my trunk for some thin pyjamas and go to bed.