I spent yesterday morning on the Festival Street, 30 feet above the level of the old street; there it is with the pavement still in position just as the Hebrew captives must have walked on it. The pavement bricks have a finishing surface of asphalt or bitumen like our asphalt streets. 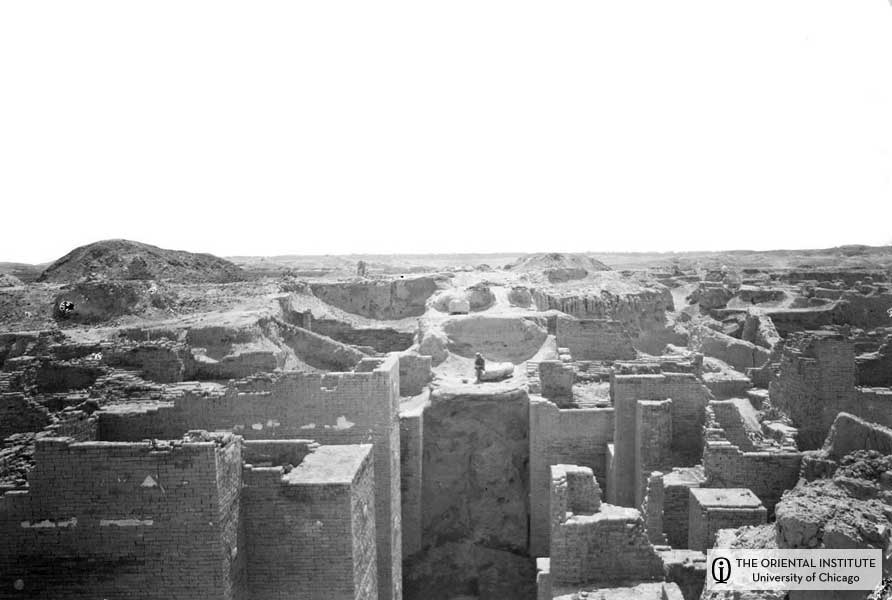 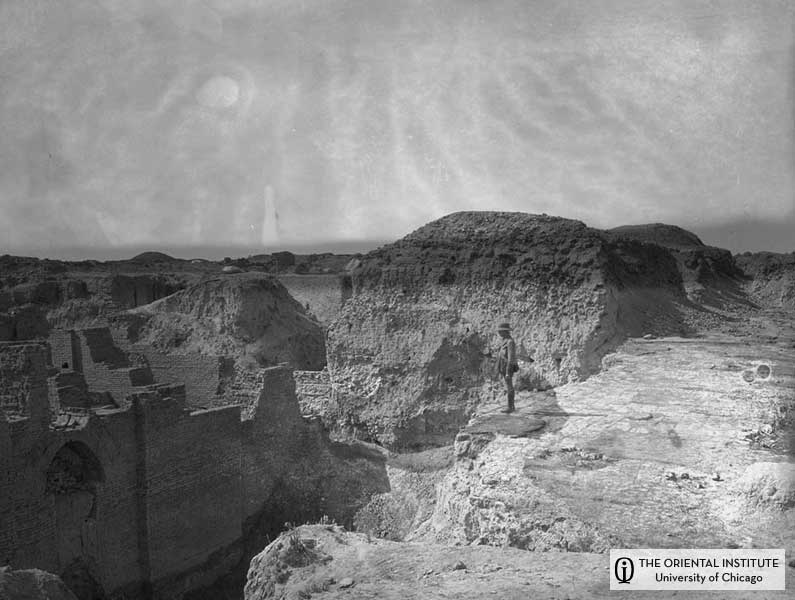 Luckenbill and I also examined the Ishtar temple where, according to Herodotus’s unsavory story every woman was obliged to sacrifice herself. 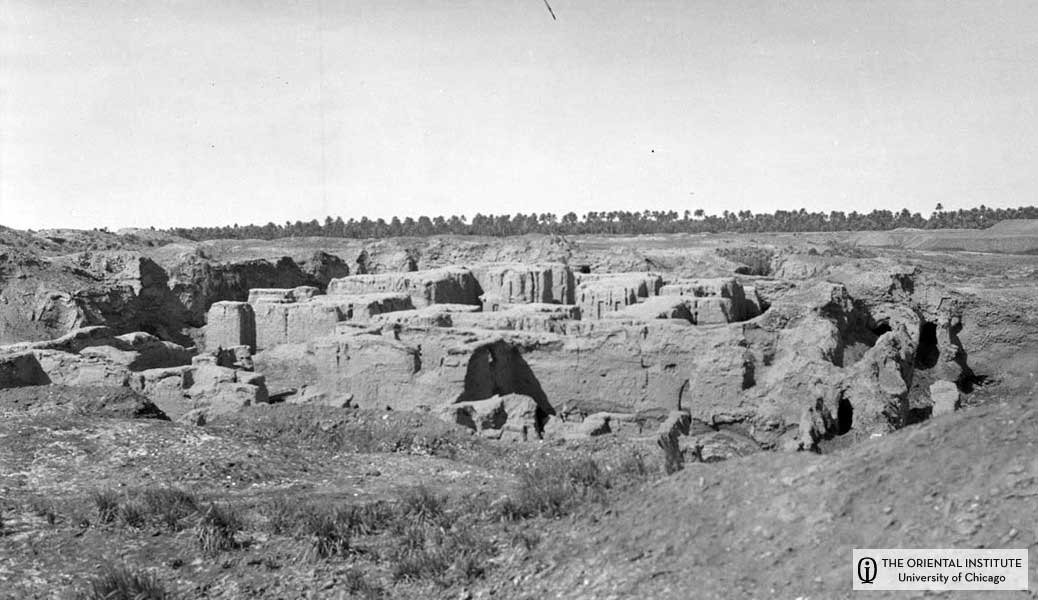 In the afternoon we examined the wonderfully interesting mound at the extreme north tip of the city still called by the Arabs “Bab-il” (“Gate of God”) which preserves the venerable name of the old city and sounds strangely enough, surviving thus in the mouths of the modern natives. It is a vast and lofty mass of substructure, but what it supported is not evident. The natives and uninformed visitors call it the “Tower of Babel”. 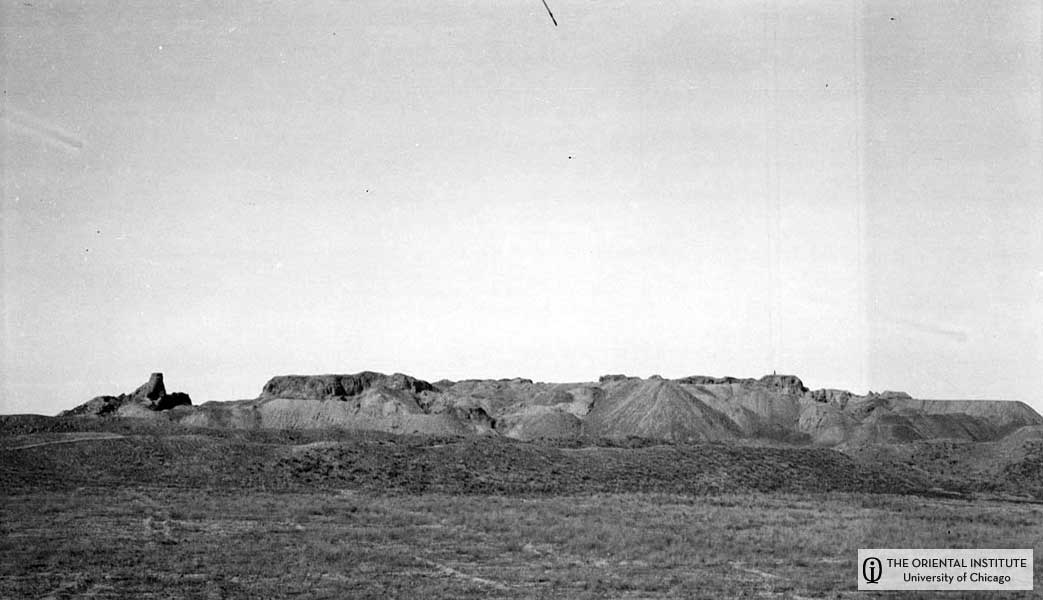 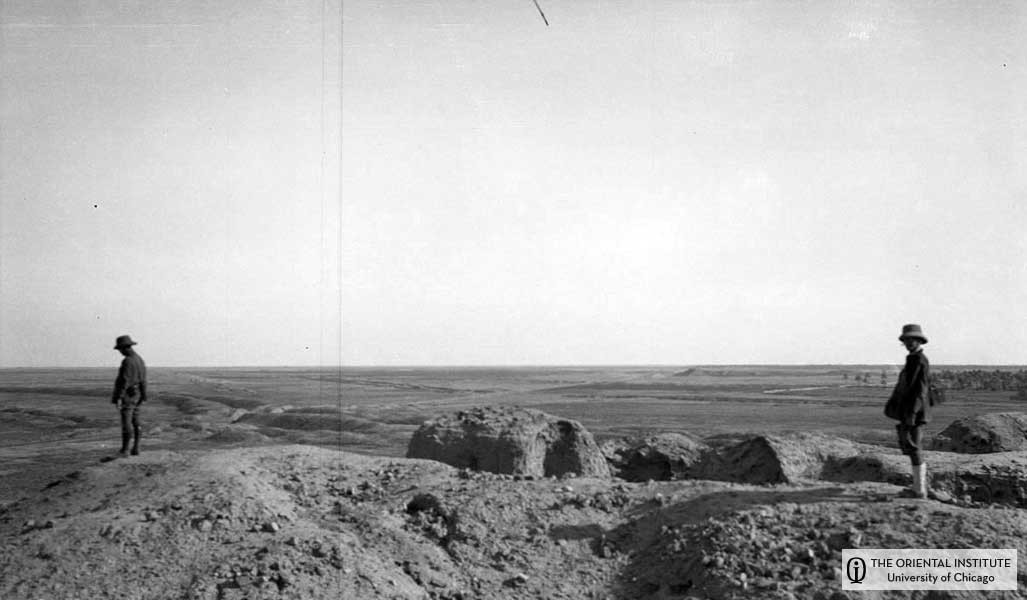 Babylon: A view looking southeast over the southeast corner of the Babil mound to the old city walls. (N. 3578, P. 7138)

I returned alone through the palms growing in thick groves where once the crowded houses of the great city stood. A native with his son and 3 donkeys came along behind me and insisted on my mounting his donkey. We chatted as we rode on through the palms, talking of his crops, of his children and his little blind girl. “Sahib”, said he, “we are very glad the Turks are gone, and the English are here. The Turks were very bad. They hanged us and they cut off our heads if we did not let them steal our crops and our sheep. Oh yes, Sahib, things are much better now”. The little boy said to me, eyeing my wrists curiously, “The sahib carries two watches, one on each wrist”. You see, he had discovered my wrist compass, which you will be glad to know is an invaluable treasure. I wear it constantly and find it much more useful than the pocket compass I formerly carried.

At Koldewey’s house I found a car waiting which took me back to Hillah for the night. I had a very pleasant dinner with General Wauchope, cousin of the general of the same name who was killed in the South African war. This morning he sent his car around to my quarters and I returned to his, where he and his aide-de-camp joined me, and we drove up here to look over the ruins. The general was deeply interested and I spent the whole morning with him. It is useful work to show the British rulers of these ancient lands something of the great scientific responsibility which rests upon them. To my surprise they are openly discussing the feasibility of installing Koldewey over the excavations again! I took him down to the ancient Euphrates bridge and left him there, — after he had again invited me to dinner and asked me to bring Luckenbill along. 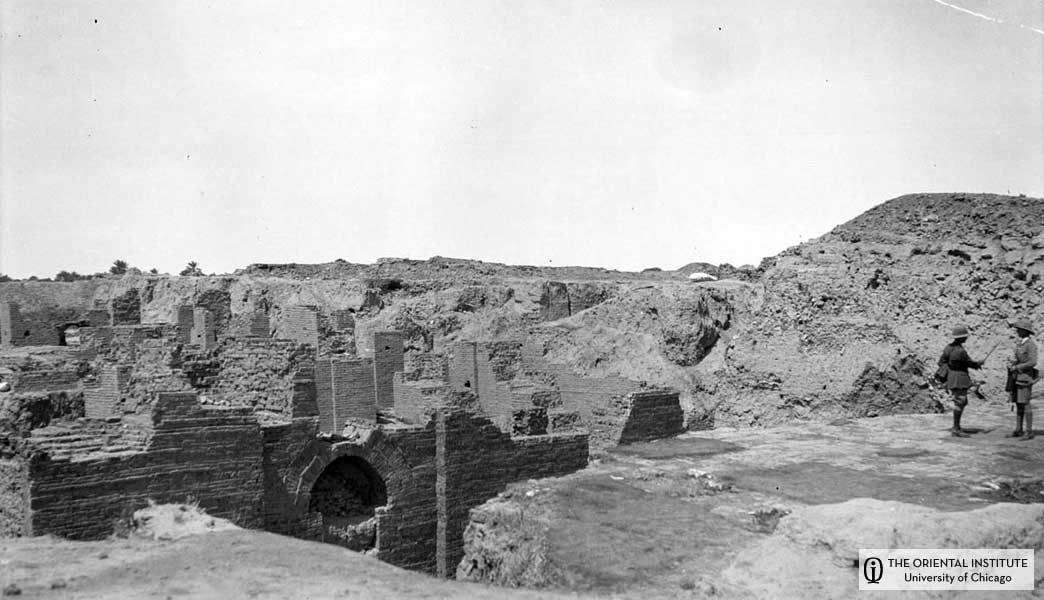 They show how Nebuchadnezzar raised the palace quarter high above the level of the Assyrian restoration which followed the complete destruction of Babylon by Sennacherib. Sennacherib, Emperor of Assyria, weary of constant rebellions of vassal Babylon, utterly destroyed the city and turned a canal over that wreckage. His successors restored the venerable city, and a generation later, after the destruction of Nineveh and the fall of the Assyrian Empire in 606 B.C., Nebuchadnezzar the brilliant young king of a revived Babylon, raised his vast palace over the Assyrian restoration of the city and crowned the whole with the famous “Hanging Gardens”. It was deeply interesting to find the pavement of Nebuchadnezzar’s gorgeously adorned street, some 30 feet higher than the floors of the Assyrian building along the street. It was all done in the time of the Babylonian captivity of the Hebrews, after Nebuchadnezzar had destroyed Jerusalem in 598 B.C.

We have also been over the scanty remains of the Greek theatre, erected by Alexander’s successors after his death, which you remember took place at Babylon in 323 B.C. It marks the extraordinary interfusion of East and West which had been going for some time and culminated in the western spread of Christianity, an oriental religion. 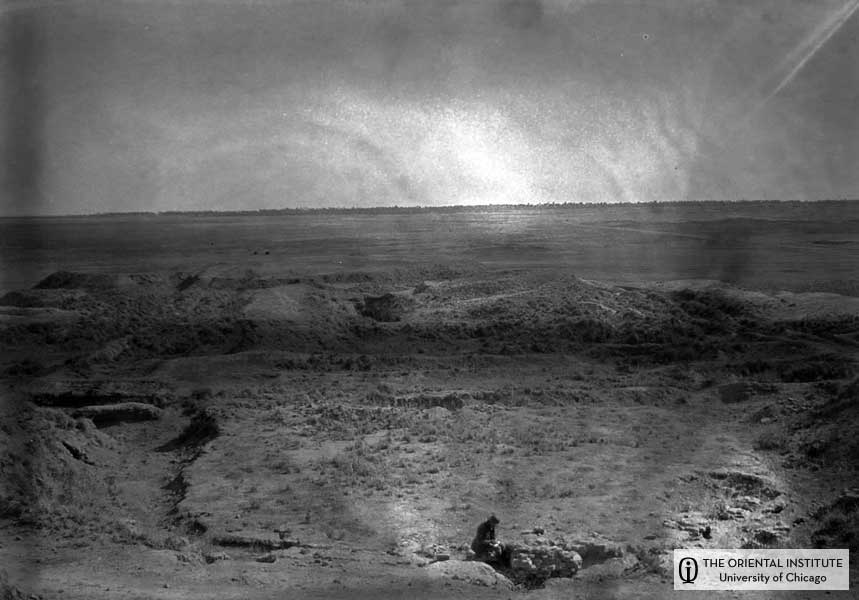 At 4 o’clock a government launch comes up for our camp outfits and the rest of the party are all coming back to Hillah for two nights more. I am glad to say I have found a mixed local train service from Hillah to Baghdad, leaving Hillah at 4 p.m. and reaching Baghdad at 8:50 (evening), thus relieving us of the necessity of traveling all night after taking the train at 1 a.m. So we go the 30 mile trip to Nejef tomorrow (Saturday) and the short trip to ancient Borsippa (Birs Nimrûd) Sunday in order to get back to Hillah in time for the 4 p.m. train. I have wired Major-General Hambro, the day and hour of our arrival and I suppose he will have quarters for us somewhere. I have sent to him and also to the Civil Commissioner an outline of our plans for trips from Baghdad as headquarters. I am confident now, that we can carry out these projects by the first of May, return to Basrah and sail thence for Egypt (Port Said) not later than the middle of May, reaching our Syrian work thus before the end of May. This ensures an early return to America, leaving Alexandria by August 1.

Luckenbill and I left Babylon for the last time at 4:45 this afternoon, in General Wauchope’s car. The launch had not yet arrived when we left, being 3/4 of an hour late. I was afraid the boys might be marooned in Babylon over night with no food, so I went to Brigade Headquarters and found the proper officer, who went with me to I.W.T (Inland Water Transport), where we learned the launch had left Hillah at 3 p.m. for Babylon. Sure enough, at 6:00 p.m. the launch moored below my balcony with all on board. I spend a good deal of my time on courier work of this sort. Luckenbill is always most willing and obliging, but he is as helpless as a child in all these situations and stands in a dazed fashion loudly projecting indignant interrogations into space, and wonders why nobody answers or does anything! Imagine losing our only dark cloth the very first day it was used! I told him to buy some black native goods in the first bazaar. That was 16 days ago. Today when I asked Luckenbill to come out with me and make some views, I found he had overlooked, — to my amazement there was no dark cloth! Now a camera cannot be accurately focussed without a dark cloth, but here it had been used for three days at Babylon, of all places, to say nothing of the other places we had visited, without a dark cloth. The cloth must be used also in such bright sunlight as we have here and in Egypt to cover the plate holder when the slide is out, but this too has not been done though I gave very particular instructions on this point. Where shall efficient help be found? Nobody in this party can use any Arabic but, although this Mesopotamian dialect is entirely new to me for it is totally different from that of Egypt, I boned up enough on the way here, to get along. But the whole party turns to me for help. “Could you tell Ali, we need so and so”? “Abbas ought to be told to go and watch that baggage we left at the last landing”. “Could you tell these porters where to take our things”? etc., etc., etc.; when I ought to have my mind on other things. The first time I asked Luckenbill to give the servants certain instructions and save my time and attention for other things, he replied that his Arabic was not equal to it. As he had talked very fully about his acquaintance with pronunciation of Syrian Arabic, I supposed he could use it. He speaks only English to our two boys. Sometimes they understand and sometimes or mostly they don’t, and I have to step in. As for Shelton, he too is most willing and obliging, but he is a cross between Simple Simon and Handy Andy. My dear good Ludlow, the finest traveling companion you could desire within the limits of civilization, is far too luxurious and easy and deliberate for a rough and ready life like this. While Edgerton has been completely transformed, and is far the most quick, active and generally useful of the group. — Well, please do not breathe a word of all this to anyone. There has not been a single quarrel or altercation. I have once or twice come down with some emphasis, but the spirit of the whole party is agreeable and after all that quite offsets all the troubles I have mentioned.