Well, I was not expecting to be here today again, having once said good-bye to the place. But last night in returning from Nejef, I found a note from General Wauchope in my room, which I enclose herewith. So this morning we have driven up here with the general. Lunch is spread under the palms of Babylon, two orderlies and an Indian servant are serving cold bottled stuff, and I have just had a refreshing lemonade. The general is over at the railway waiting for friends who are coming down from Baghdad on a railway motor. 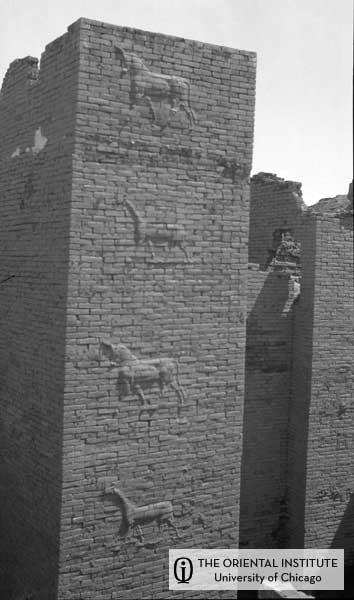 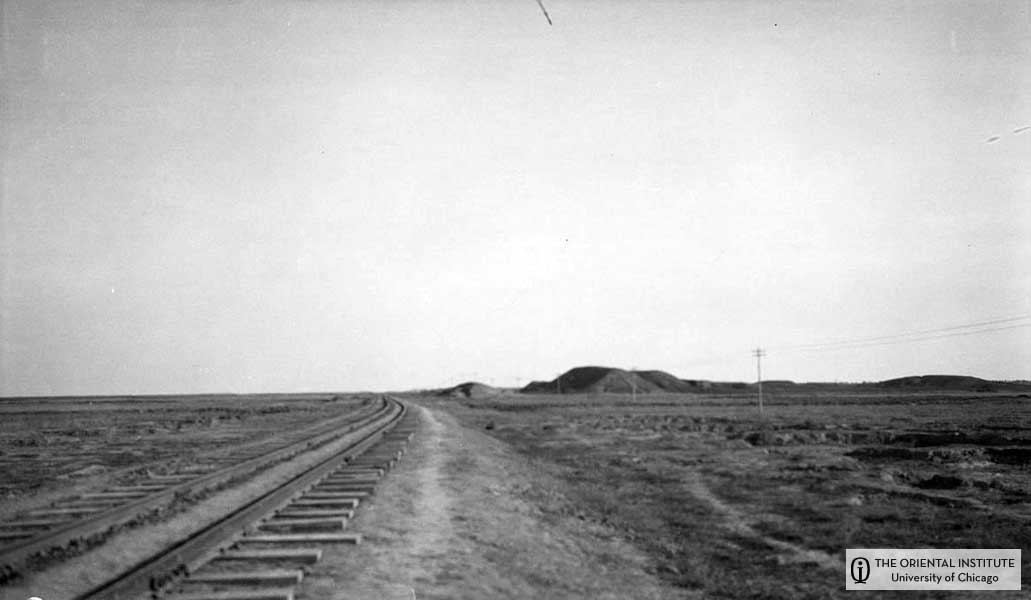 I was unable to put in any entries yesterday, a wonderful day! We drove 40 miles south to Nejef, perhaps the holiest and most venerated city of Islam. It is the burial place of Ali, who married Mohammed’s daughter, and many Mohammedans regard their two sons Hasan and Husain as the only legitimate descendants of the prophet, and the real and legal heads of Islam. The devotees of Ali form a great eastern division or sect of Islam called Shîahs, as against the Súnni or western sect. All Persia is Shîah. Pilgrims come from far across Asia to pray at the venerated tomb of Ali. All Shîah Moslems desire to be buried beside it. I have met a man carrying a corpse wrapped in reeds and balanced across his horse on the pommel of his saddle, while he rode behind it and kept it in equilibrium as he followed the winding road across canals and embankments. Such “corpse-carrying” is widely practiced and there are men who follow it as a calling. I photographed the first one I met, and I think I got everything on the plate but the smell! In the turbulent times that are past, these corpse-carriers were frequently robbed by the Arabs. They therefore hit upon the idea of putting their money in the mouth of the dead. The Arabs however, soon discovered where the cache was, and wrenching open the mouth of the corpse, they likewise discovered the cash! … These bodies are brought from far and near for burials at Nejef by the tomb of Ali. Only a short time ago the body of a former Shah of Persia, possibly the grandfather of the present Shah, was carried to Nejef for secret interment. The place is so holy that no non-Moslems have been permitted to enter it, and with few exceptions no white man has ever visited it, for his life would not be worth a farthing. The first British Political Officer there, Captain Marshall, was murdered. The British hanged eleven of the leading murderers and banished the rest. All is now quiet there. Nejef is situated about 100 miles south of Baghdad, and 40 miles south of Hillah, on the edge of the Arabian desert, south or west of the Euphrates. 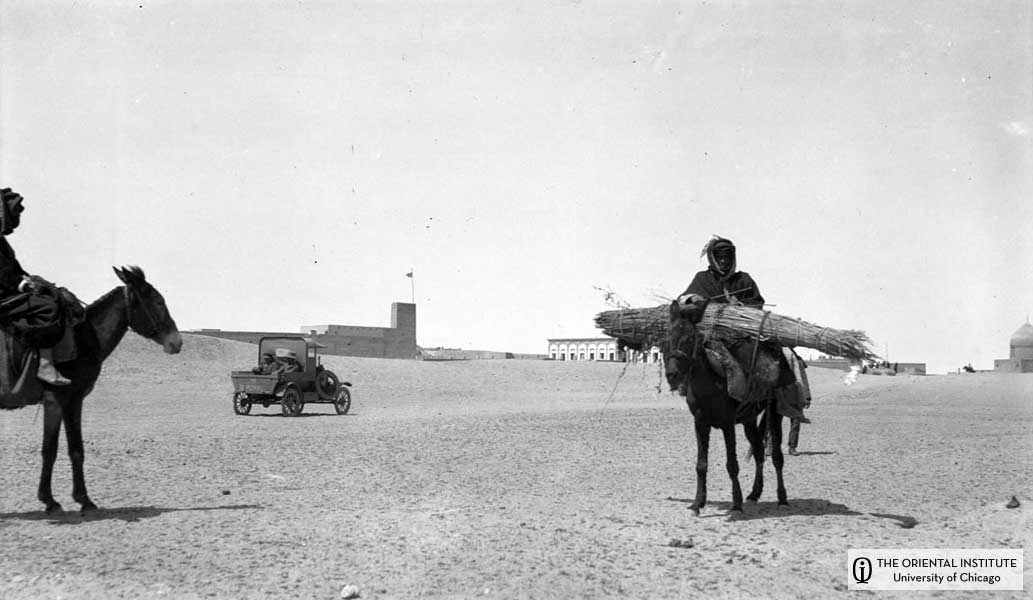 Najaf: Corpse carrier taking a body for interment. Body carrier at the sacred city of Nejef. The body, wrapped in reeds, lies across the pommel of the horseman’s saddle. Such bodies are brought from great distances, even as far as Persia, to be buried in this holy city near the sacred tomb of Ali, the son-in-law of Mohammed. The approach of these bodies is often quite evident long before they can be seen. April 3, 1920. (N. 3239, P. 6799) 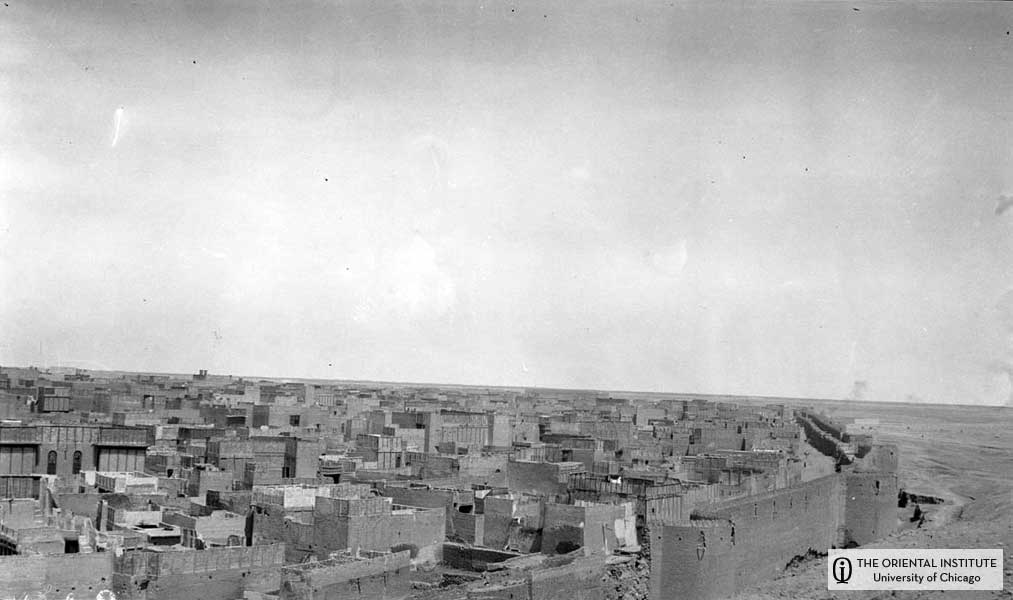 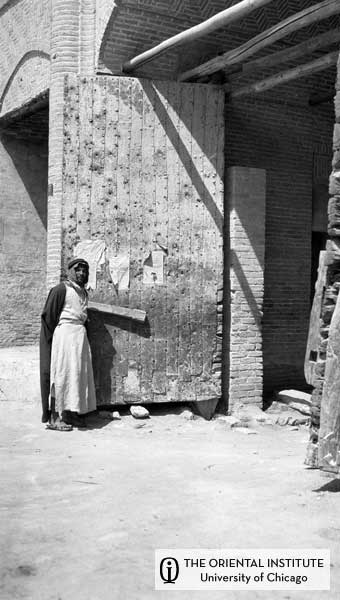 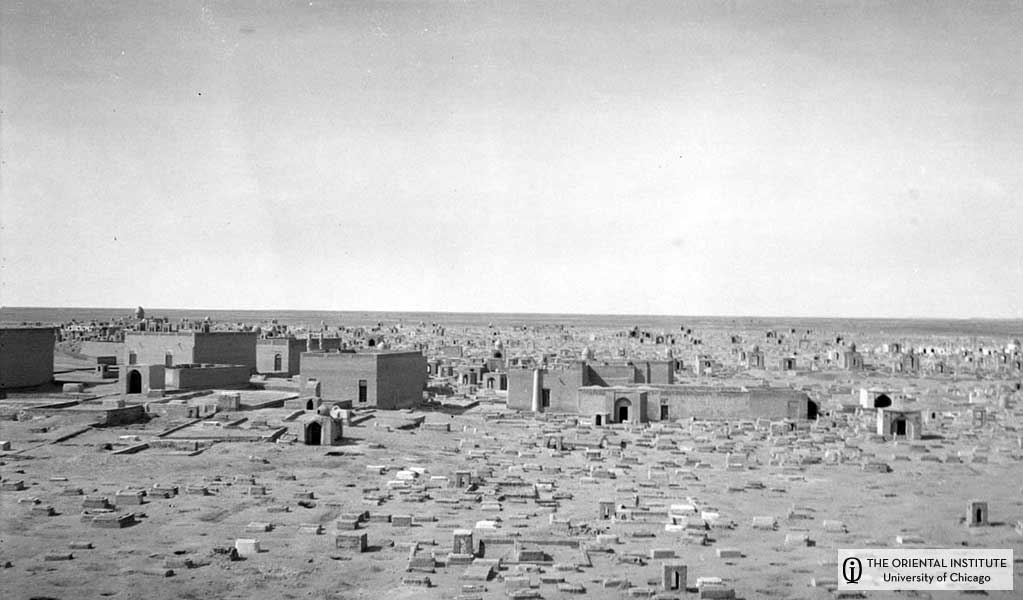 We drove out of Hillah a little after 9 a.m. in two Ford vanettes. Thirty-four miles out we crossed the outermost branch of the Euphrates on a bridge of boats at the picturesque old town of Kufa. Winding across the plain as we left Kufa behind, we saw shining above the margin of the desert in the south, a golden dome. It was the dome of Ali’s tomb. Then as we made our serpentine way among the palm groves, the city gradually rose above t he horizon and floating above the tremulous mirage swam amid vapourous lakes, —no longer grounded on prosaic earth, — a phantom city floating in the clouds along the horizon, and dominated by the glittering golden dome of Ali’s tomb. There is a lot of futile words, powerless to convey the mysterious vision of this remarkable place as one rides out to it along the margin of the desert. The Political Officer received us cordially and took us about. We went through the bazaars, — the real oriental thing. These craftsmen were not putting out crudely and hastily made junk for sale to the usual army of tourists, as in Cairo and Damascus. To my surprise the goldsmiths were producing beautiful filigree work, which I am sure you will admire when you see what I am bringing you. Here we were in bazaars absolutely cut off until recently from any contact with European life—bazaars which any orientalist would have given his ears to see, a few years ago. A little procession carried a body past us, and went on to lay it in the mosque by Ali’s tomb, before it was taken out to the cemetery for burial. The bazaars and houses cluster so thickly about the mosque that its effect is quite marred. Its entrance is adorned with a gorgeous profusion of brightly colored Persian tiles several centuries old. No non-Moslem is permitted to enter and we could not go in. 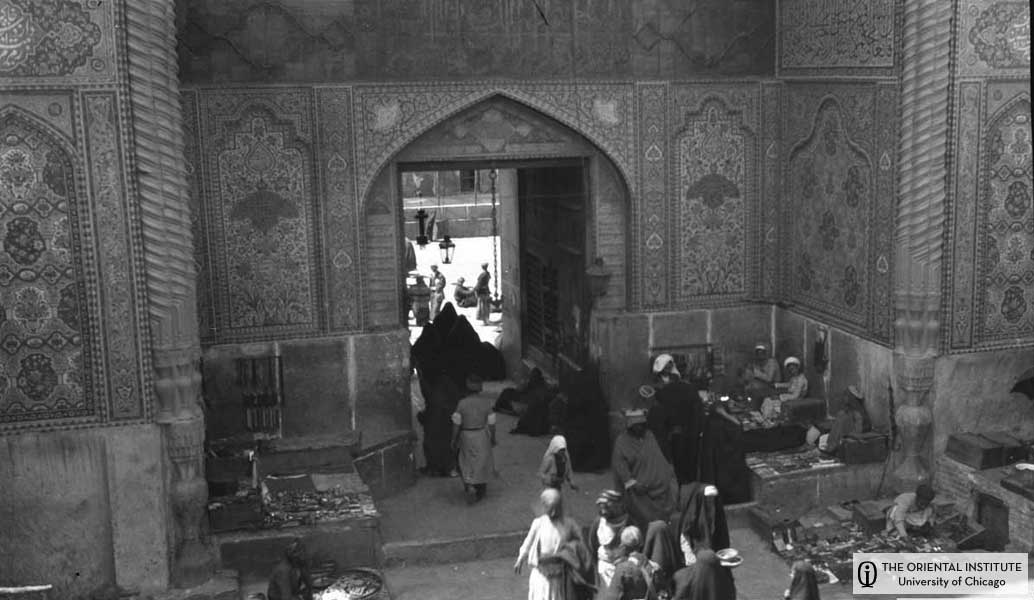 Within, all sorts of merchandising is carried on—vendors of fish and vegetables, among them many women, jostle the low stands of the squatting money-changers, sitting in rows along the walls of the courts, and one is forcibly reminded of Jesus’ cleansing of the temple in Jerusalem. 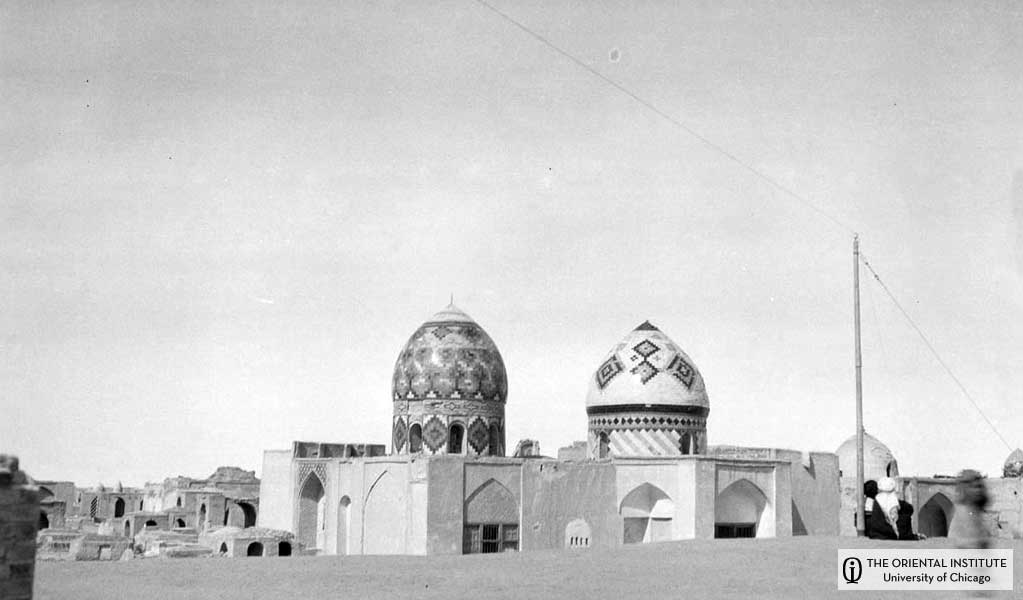 The town is surrounded by a wall, picturesque but of recent date, built to repel the attacks of the Wahhabees. We climbed the wall, and got a fine prospect of the town and the surrounding desert. The cemetery stretches far out upon the plain, and contains myriads of burials, from the simplest earth mounds to the gorgeous tawdriness of the Sheikh of Mohammera’s domed tomb. Just below us was a large enclosure where mortuary attendants wash the incoming bodies before burial. As we stood there, seven men issued from this place, each with a body on his head. Of course we photographed them as they passed, but one very obtrusive feature of the procession, as the wind came our way, was not caught by the camera! 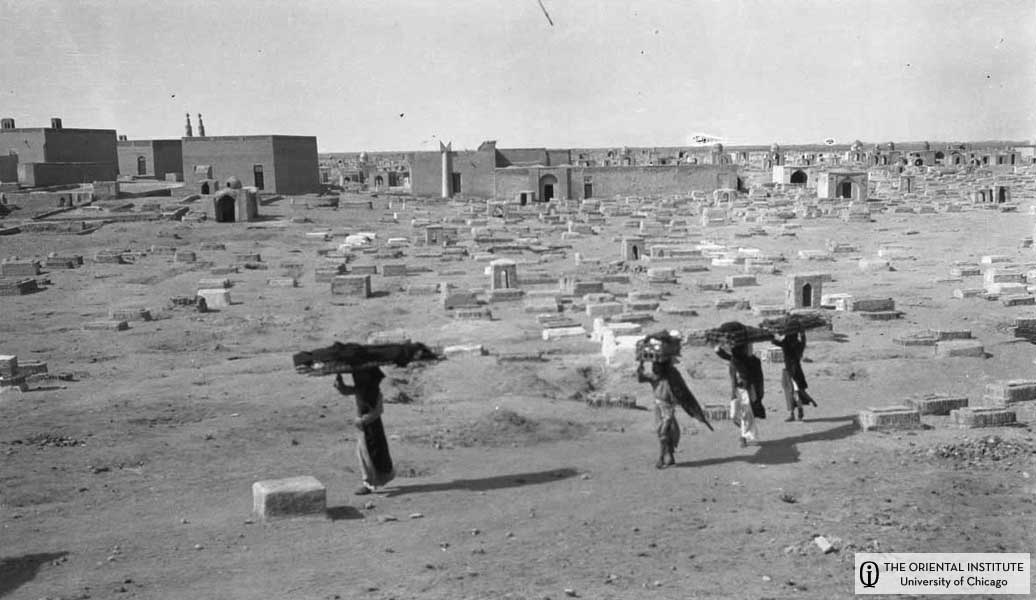