I was too tired yesterday evening to bring this chronicle up to date. I sent Abbas with a memorandum to Luckenbill and the boys early in the morning yesterday (Saturday) in order to have everything ready for our departure for Khorsabad, but we were much delayed in getting hold of our old friend the redoubtable Vicar-General, whose information I had found useful as we passed through the country. We had crossed the tedious ferry and reached our Red Cross ambulances on the east side, and were trundling slowly across the ruins of Nineveh by ten o’clock, which was very late. 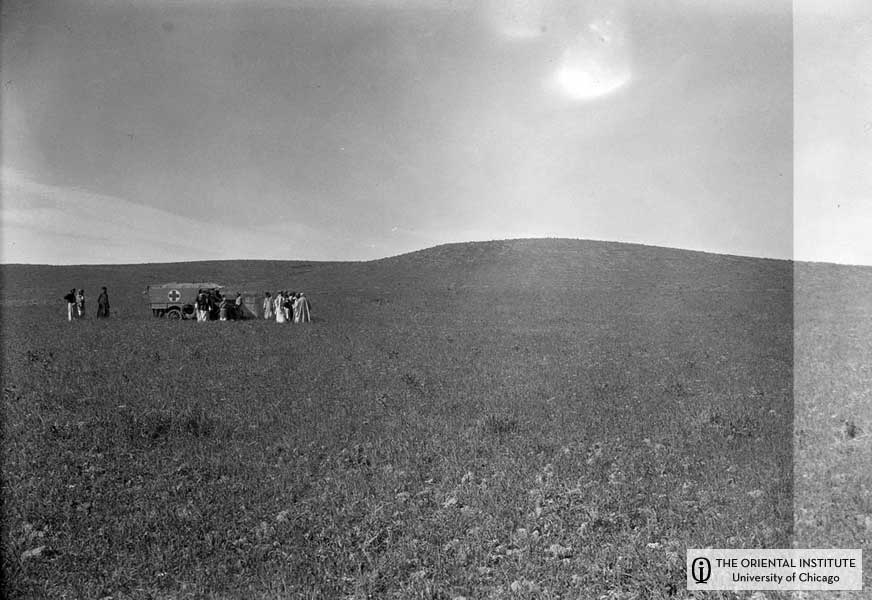 Khorsabad (ancient Dur-Sharrukin): A view of the University of Chicago caravan and Arabs who uncovered a pavement slab in one of the gates of the walls of Khorsabad. April 17, 1920. (N. 3053, P. 6613)

I sat with our Indian driver and had behind me an Arab rifleman and the old priest, both of whom knew the road. East of the walls of Nineveh we turned northward, and as soon as we had issued from the walls of the city we found the road, or what was called a road, to Khorsabad almost impassable. I was glad I was accustomed to driving, for over and over again we would have smashed if I had not told the driver what to do. At one semblance of a bridge I stopped the car, jumped out and told the driver how to get over. I supposed that Luckenbill would do the same, but he was too slow and his car barely escaped going off the bridge! Luckenbill at once remarked, “You ought to have stayed by and seen us over. We nearly went off the bridge”! You see what I am expected to do and be. Indeed I constantly went up and down that line of cars, directing, stopping, cautioning and encouraging, and repeatedly we would have come to grief but for such direction. I sometimes or perhaps I should say most times seem to be in charge of a kindergarten party, absolutely dependent on me for nearly everything they need except the breath they breathe. It is better for me not to put down here all that is said and done, but there has been no scene and no row, for I simply will not have that kind of thing in my expedition: it is far better afterward to have been inexhaustibly patient. I might give you this item. I very much wanted a good view of the northern mountains just behind Khorsabad, with the snow peaks, but the big camera was packed away, and my colleague asked me to take a snap shot with my hand camera. I explained that a time exposure was necessary to get the mountains at all. So he unpacked the big camera, while the cars waited, and on going back to indicate just what I wanted included in the view, I found my friend, without a tripod, holding the big camera in his hands and just about to trip off—would you think it possible—a snap-shot! Handy Andy Shelton is the prize, however. He will open two holes in a tin of milk in this way: he carefully and gently makes a large pouring hole at one edge, and then at the other edge for the air-vent hole, he strikes a violent blow, squirting milk out of the first hole all over everybody in the party. He will balance a whole plateful of costly bully beef on the end of a shaky trunk in the train, where the whole thing promptly dances off on the floor and dumps the beef into the dust! When my colleague opens a tin of milk, however, he pierces the hole for the air a trifle of over an inch away from the pouring hole, and not above it, but at one side! Luckily I have a sense of humor and that saves me in most situations…

By noon we had reached the village of Khorsabad, some 15 miles northeast of Mosul. It is a tiny hamlet of not over fifteen houses, perched on what was once the magnificent palace platform of Sargon. It was the northernmost residence of an Assyrian king, almost a hundred miles north of the earliest capital at Assur, of which I have written you. Indeed we have traversed all of the ancient original kingdom, in coming up from Assur to Khorsabad, which Sargon, an able soldier, who usurped the throne in 722 B.C., placed on an eminence or rather on the slope at the western end of a great gaunt ridge seemingly of limestone, thrown out westward as the southernmost ridge of the northern mountains, overlooking Assyria. The new residence as we approached it seemed immediately under the shadow of the northern mountains, the snow peaks of which rose directly behind the southernmost ridge at whose western end we found the palace platform. It was a magnificent situation for a royal residence, and the trip from Mosul gave us a vivid impression of how Assyria stretched northward along the Tigris, right up to the abrupt rise of the northern mountains.

Years ago Botta and Place, both French Consuls at Mosul, excavated the palace platform and took away all that was of value. It seems to have been completely gutted. I found out from the sheikh of the village, however, that the Frenchmen had not excavated the great gates of the city, the large mounds covering which, we could see ranged along the southern slopes of the ridge. At great risk to our cars we managed to drive directly across the cultivated fields and stopped just below one of the gates in the southwest wall, near the southern corner of the city. Here I found a large building, clearly traceable within the southwest wall of the city and abutting upon it, — a building which had not been excavated by Place, nor has he planned it. The easternmost gate in this wall, close to the south corner of the city, was a large structure, now, like all the other gates, completely covered with earth from the disintegrated sun-dried brick of the superstructure. But the stone sculptures of the gateway are still in position, and a short distance eastward, we found under a few inches of soil a magnificent big stone paving block still in position and bearing in large stately cuneiform characters the annals of the great king. The block must be some five by ten feet in size, and itself alone would make an imposing museum piece. Sargon’s annals are of the greatest importance for he usurped the throne during the Assyrian siege of Samaria, whence he sent the so-called Ten Tribes away as captives. We have demonstrated that the excavation of these seemingly untouched gates, would bring a fine return in museum monuments. Meantime of course this particular block will be broken up and sold in fragments by the Arabs.

We managed to negotiate the difficult road in safety on the return journey, and it was with some relief that I saw our last car turn in through the walls of Nineveh. It was a not unwelcome feeling also, to leave the northern mountains behind… On leaving our old priest, I made an engagement with him, to meet him at his house and inspect some antiquities which he has, and which turned out to be valuable, as I will tell you later. We have spent today looking about Mosul and tomorrow morning at 7:00 we leave with the convoy for Shergat, where we take the train for Baghdad again.