When you wrote me a letter at 11:30 A.M. and addressed it to Aleppo, you did a fine morning’s work. For this morning when I went to the American Consulate, there was home news to greet me coming from the terrible life of the desert, — home news only a little over a month old, for it was dated April 9th. I carried it a round all the morning, — busy as busy could be, — and reading it or in it whenever anybody gave me a moment’s respite, I had the long drawn-out pleasure of getting it in nibbles. I saw all the home scenes, — the little family circle incidents, which may mean nothing to you as they come along in household routine, but are infinitely precious to the wanderer with seas and lands between him and his home, into which he thus gains glimpses. Well, well, the time will pass and I shall be at home again to talk it all over and to tell you all about it; but if I could talk a thousand years I could not tell you how grateful I have been for just this letter which met me here at the end of the desert journey.

It has been such a busy day! When I woke this morning — lying between sheets in a clean sunny room, with a good breakfast awaiting me below, I rubbed my eyes and wondered if it could be true. Only the previous morning I had waked in the awful den which we have begun to call “the Golden River Hotel” (Nahr ed-Dahab means “Golden River”), with the horse manure all over my bed and the filth dropping down with the vermin from the ceiling as the soldiers tramped around above us. Well, it was worth it to be the first white men to cross the Arab State since it was proclaimed. I am unable to get into cable touch with America from here. So I have wired Nelson in Beyrut, which can be reached, and have asked him to forward a cable to the Tribune, for it seems to me a Chicago journal ought to announce at once that University of Chicago men have been the first to cross the new Arab State. I have also other reasons. Among them I may mention that the Yale men without having any money in sight to carry out their plans, announced in the press all over the country a great Yale expedition with excavations to be made in Asia Minor. The whole business has petered out. They have no money and no prospect of any. Clay has quietly retired out of the back door of Mesopotamia by way of an oil-steamer I told him about, and the University of Chicago Expedition, commissioned by the British Mesopotamian Government to do a piece of archaeological work for them on the way, has come out by the overland desert journey, as planned from the beginning, and arrived in Aleppo in safety. Now of course that kind of self-congratulation is for home consumption only, but if you select your hearers I have no objection to its being read to our friends and those of the university, — first of all of course to President and Mrs. Judson.

The first task this morning was to meet the American Consul and go with him to call on the Arab governor of Aleppo. We drove to the serail, under the shadow of the lofty and impressive citadel of Aleppo, where the governor received us cordially. I told him I wanted to stop twice on my way to Beyrut, first at the vast mound of Kadesh (Tell Nebi Mindoh), and then at Baalbek. He said he would write me two letters: one to the mutessarif of Homs, near Kadesh to see what the Mudir of Kosseir, the station nearest to Kadesh, furnished every aid and facility in reaching Kadesh, and another to the kaimakam at Baalbek to see that we are protected there. We shall thus see the chief things I needed to look over in North Syria, except Jerablus northwest of here on the Euphrates, which as I wrote you above, is evidently too risky for us to undertake, especially as the news has come this morning that the present French expedition to Aintab, just north of us here, has been beaten back and forced to retire. This leaves about twenty Americans there without succor, food or protection, and with no way to get out. We might be cut off in the same way at Jerablus.

The railway connecting Damascus and Haifa (on the coast by Carmel) has just been cut, and we cannot reach Jerusalem from Damascus as we planned. We shall push on from Baalbek at once to Beyrut, and arrange from there for a quick run, with light baggage, to Damascus to see Feisal which will be easier in view of my letter to him from Lord Allenby. But Feisal will not be able to let anybody know he has a letter from Allenby, the Arab dislike for the English is so strong. We shall have to return from Damascus to Beirut again in order to get out and reach Jerusalem, and thence Egypt and home.

To return to Aleppo experiences again, I found the governor much interested in the Aleppo citadel, which he had never visited, for he is not a native of Aleppo. So I asked him if he would come with us to look it over, and we made an appointment for five o’clock. Meantime we went to the chief of police and had our passports visaed; and as the consul had warned us that we would have great trouble in getting our baggage through at the station, unless we arranged it with the police in advance, we got the chief to send notice of our coming to the station and authorize us to pass without having our baggage examined. We had also to secure a permit for our invaluable Ali, who is going with us. By this time it was nearly five and we waited for the governor to go with us to the citadel. It is a magnificent old place in the heart of the city, built on a high mound undoubtedly covering the ancient town already mentioned in the inscriptions recording the great Egyptian conquests. The governor was much interested in the fact that his city was so old. The present citadel is of course relatively late, but the great gate and towers go back to Malik ez-Zahir and the crusades. We found magnificent views from the lofty walls, and looked far out over the eastern desert to the horizon behind which lay the Golden River Hotel! 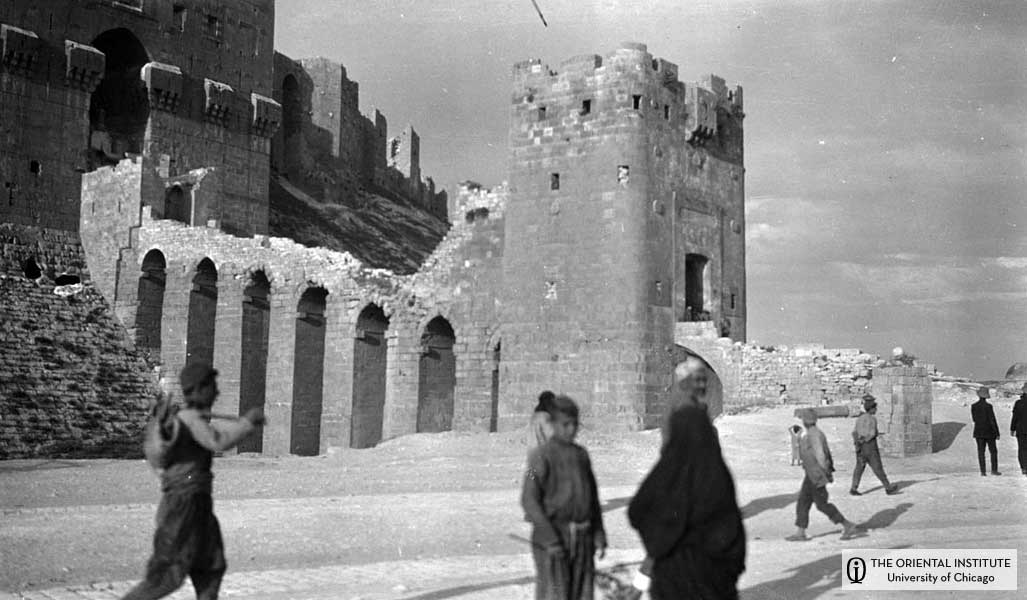 Aleppo: The citadel showing the entrance through the outer tower and a viaduct leading to the vestibule of the main door. (N. 3910, P. 7470) 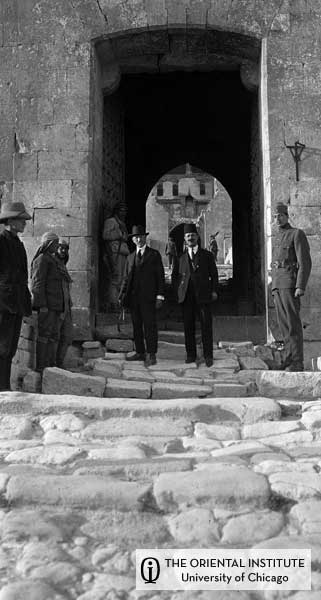 Aleppo: The citadel entrance; Professor Breasted and the governor of Aleppo standing on the steps of the outer tower. (N. 3911, P. 7471) 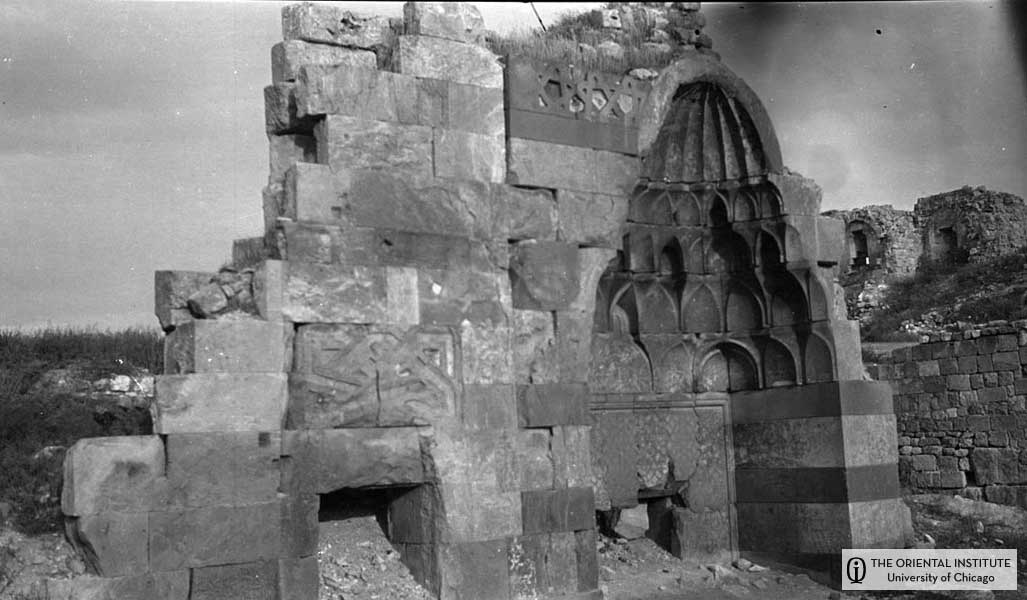