We thought we had struck the worst at El Hammam, but this is decidedly worse. The rooms in these khans are raised a story above the barnyard enclosure where the horses, wagons and drivers spend the night. But in this hole there is only one second floor room and that was taken. We are therefore down with the horses and all the rest of the mess just outside our door. This might be thought to possess something of a rustic flavor not altogether intolerable, but for the fact that a heavy wind is blowing. It picks up all the dried horse droppings outside and they become droppings in a very personal sense. My field bed is already deluged, and my bag is full. As the drivers put a leaky petroleum tin on top of my bed-bag, the resulting mixture of flavors and aromas is curious and interesting. Especially effective and penetrating is the smudge from the burning dung, the only available fuel. The disconsolate Ali has just carried a huge tray of it past my door. Our dinner is now being cooked over it, and as a result of the wind, much of it is also being cooked in our dinner as well.

We are now in the Syrian plain where the armies of the Pharaohs crossed century after century to reach the Euphrates. We have slowly passed from irrigation agriculture within the narrow limits of the Euphrates shores, to a rain agriculture producing on the whole a very scanty harvest. Yesterday was a long, hard day, — the longest stage we have had. I got everybody out at 3:00, which was not as heroic as it seems. The babble of arriving and departing wagons in the khan at El-Hammam continued without interruption all night: — drivers shouting to their comrades and their horses, wagons rattling: — in short a constant row which beggars description. I finally fell asleep and was wakened by Luckenbill, who said it was four o’clock. It was really, as I saw by a glance at my illuminated wrist watch, just 1:40. Luckenbill in reading his own wrist watch had mixed up hour and minute hands, with the above result. Of course it was impossible to sleep again, though my worthy colleague was snoring peacefully in a few minutes. I have said nothing about it, further than to advise him to use matches next time. So I was out at 3:00 and by 5:00 we got the caravan off, making a stage of 45 miles, the longest we have yet made in a single day. This carried us from El-Hammam to Meskeneh, the point where the Euphrates begins to turn south-eastward toward the Persian Gulf. 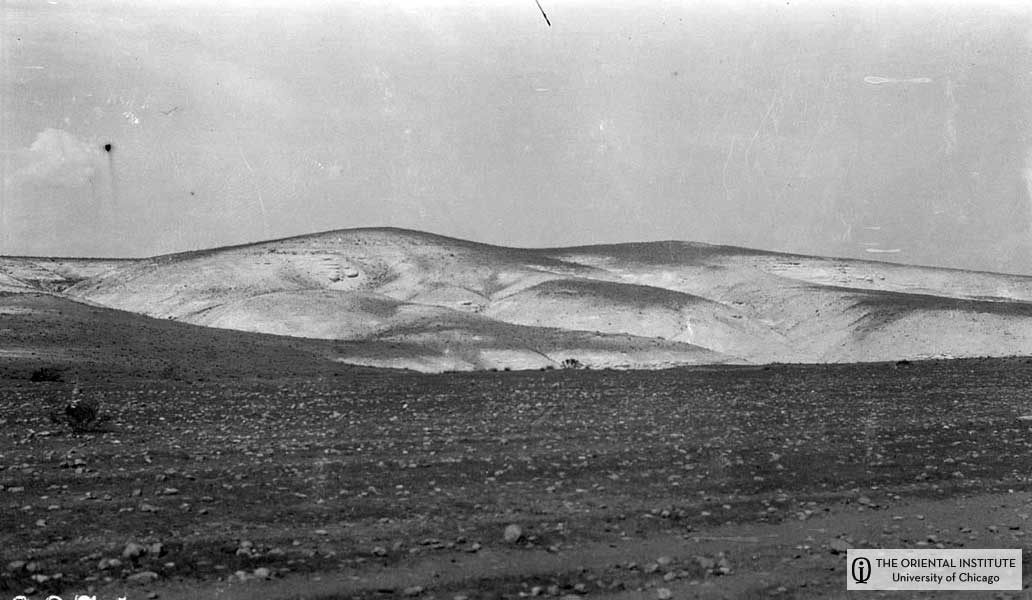 The khan at Meskeneh was impossible, and as there were luckily several government buildings left unfinished by the Turks, we went over there. The keeper of the khan came over to see me, with many assurances: “O Pasha, I will give you fine rooms, clean and beautiful”. “Yes,” said I, “I have seen them”. “And I will bring you water, which is far away in the river”. “Yes,” said I, “Go and get the water, and I will pay you, but we shall go to the other buildings to sleep”. Just as the wagons drove from the khan where I had told them not to unharness the horses, we could see a huge dust storm with a front about a mile along, twisting and swirling and rising to the clouds of vapor above in sinuous clouds of dust from below. Before the wagons could be unloaded it was upon us, deluging our stuff with dust first and then with rain, in the midst of which two violent claps of thunder shook the house where we had found refuge. The house had huge windows and the floors were covered with the usual kind of filth in such places… All this was blown into our faces and over our stuff. Luckily the wind subsided after half an hour and Ali gathered some desert herbage to serve as fuel and make us some tea. We lighted our field candlesticks, saved from the wreckage, you remember, and were at once visited by swarms of crickets which infested the place. At the same time enormous black beetles as large as a silver dollar came droning in at the open windows and flopped down like so many flying toads alongside the lights. There was nothing in this desert halting place but the khan and these deserted buildings. Saalah, the new servant, I sent for eggs to the Bedwin whose black tents we could see nearly a mile off in the desert as the darkness gathered; but he was afraid and returned after a short time saying that they had none. I told him he was a liar, and that he had not been there in so short a time, — gave him orders to go there at once and bring both milk and eggs. Meantime I found a man whom we entrusted with our four canvas buckets to go a mile and a half to the river and get us some wash water, for we were still begrimed with dust. Just as our dinner of rice and tinned meat was ready, this man appeared with a companion and four buckets of water, for which we paid 6 piasters, that is about 30 cents. There was a great hurrah as each of our party of five got his six-cent wash! and gathered with the rest about the camp dinner table. Just then Saalah appeared with a big wooden basin of milk and a lot of eggs. A little lad had come with him to take back the basin and we were glad to see the last of it before we drank our milk, for it was unspeakably filthy inside and out.

You can form no conception of the filth of these people. Our drivers sit out in the dung heaps around the khan court, just outside our door and eat with the greatest enjoyment. They drink out of buckets in which they have just watered the horses. Not only so, but these same buckets are used for washing down the sweat-begrimed horses, which the drivers do very thoroughly, omitting no part of the horses anatomy at either end. They swab off the poor beasts with their own bandana handkerchiefs, which they afterward spread out on the horse’s back to dry. They sit at dinner on the same cushions and rugs which are afterward placed in the arabanahs for us to lie on. So after this comfortable upholstery has been slept on all night by the drivers, stretched out on the horse-droppings in the yard, we climb into the arabanahs and ride on it all day. We are simply alive with fleas, and existence is one long scratch. You feel them crawling all over you and resign yourself to misery as best you can. Well, I suppose I should have left this all out; but perhaps it is well you should know that exploring in Western Asia is not a junketing party.

Driving out of Meskeneh we rose to the Syrian upland, and as the river and the road parted company, we looked back for the last time on the Euphrates. We had entered the Mediterranean East, and a new chapter in our experiences and our explorations was about to begin. Tonight in this execrable den of filth we are 25 miles from civilization and a comfortable hotel in Aleppo. 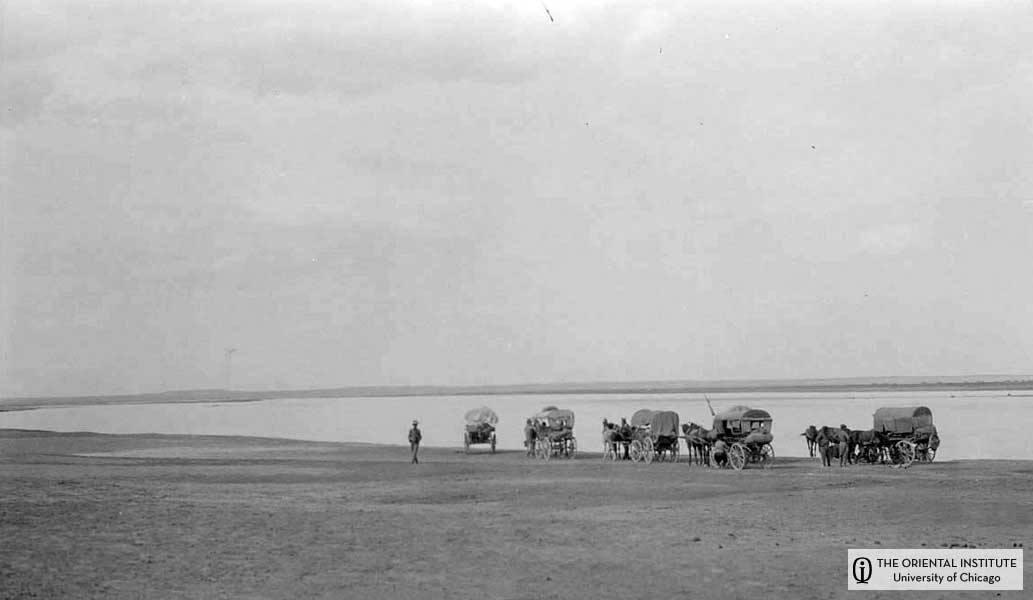 Meskeneh: A view looking north across the Euphrates from the south of the village; Oriental Institute expedition party stopping on the bank of the river. May 11, 1920. (N. 3881, P. 7441)