I sit inside a Roman fortress of Byzantine days, — a place of vast extent with imposing walls and massive gates. The sun is just setting and tipping with golden light the tents of the outermost forces of the British Empire in this remote Euphrates world, — the tents of the greatest of modern empires in a stronghold of the greatest of ancient empires. Tomorrow at dawn we load all our stuff into three baggage wagons, and ourselves into two passenger wagons, the said five vehicles being now drawn up alongside our camp, and we shall slowly move out into No-Man’s-Land, between the British Empire and the new Arab state.

So much has happened since I was last able to add a word to this record, that it is difficult to catch up. The needed additional van duly appeared, and at the same time came a long distance telephone message from Colonel Leachman, saying we were to engage our arabanahs for the Aleppo trip. At Leachman’s orders, Captain Shellswell had stopped nine empty arabanahs at Anah on their way to Baghdad as they passed through the town. So he and I went out and saw the drivers and having selected three baggage wagons and two for passengers, we made a bargain with them to take us through to Aleppo for 400 rupees per wagon, that is a little less than $200.00, — less than it would have cost us to come around by way of Bombay again. I was very busy with arrangements all the rest of the time in Anah, — so busy that I failed to get a snapshot of the Turkish ammunition dump and the shattered houses, — and Luckenbill forgot it too.

Early Sunday morning, May 2, we joined a convoy of 34 vans for the trip from Anah to the last British stronghold here in the northwest. There were many rumors of trouble with the Arabs. As we swung our seven machines into line with the big convoy, the colonel (Hardy) greeted me cordially, and told me to keep with the convoy, for their shabanas had been fired on from across the river the day before. It seems also that unlike all other Arabs, those of this region are excellent marksmen. Not long ago they shot the Indian driver of one of the vans right through the heart as he drove his machine at full speed. A neighboring driver sprang out of his machine, stopped the driverless car which was running wild, and saved the body of his comrade, fighting off the Arabs as he did so. However, we made the sixty miles, mostly over a very good road, to Abu Kamal, without incident or accident.

We were kindly greeted by Colonel Leachman and taken at once into headquarters, where we were assigned to the colonel’s office room, which he temporarily shifted to his bedroom as they are so short of space. General Cunningham, who beat the Arabs here in a big fight just two months ago, also gave us a cordial welcome, and I handed him a very strong letter from General Hambro. The general asked me to drive with him the next morning out to this fort of Salihiyah, as he was much interested in the new paintings just discovered. So we came out with a rifleman on the front seat by the driver. On the way out the general described to me the battle with the Arabs as we drove over the very ground on which it was fought, and looked up at the high cliffs on which the guns which decimated them had been planted. We had a few hours preliminary work on the paintings and a look around this vast stronghold of the late Roman Empire on the Euphrates. After lunching with the young officers in command of the post we returned in the early afternoon. It is a drive of some 27 miles from Abu Kamal to Salihiyah. 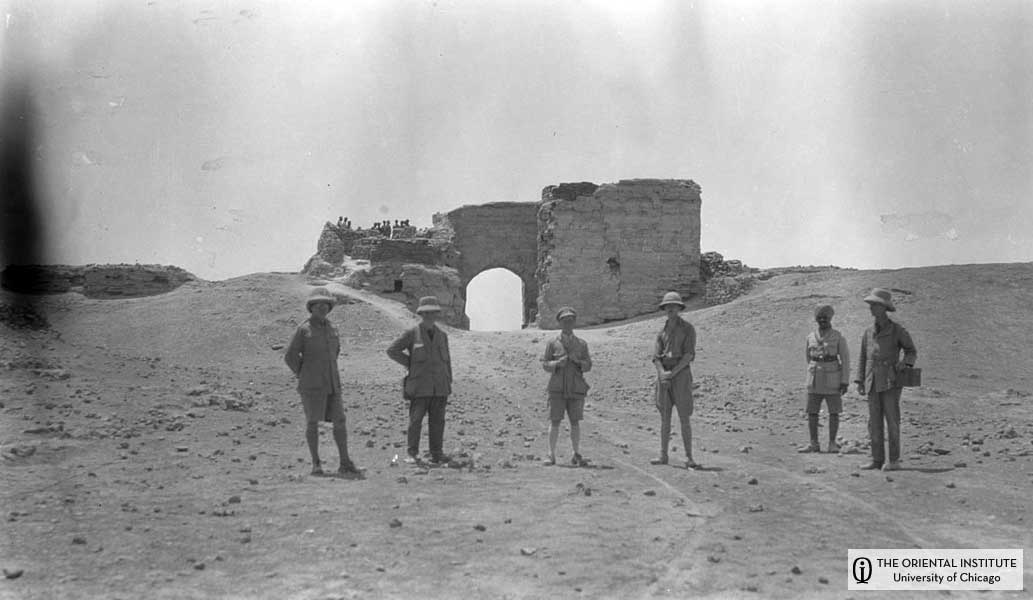 Salihiyah: Gate on the west side of Roman fort; British officers and members of Oriental Institute party in the foreground. (N. 3293, P. 6853) 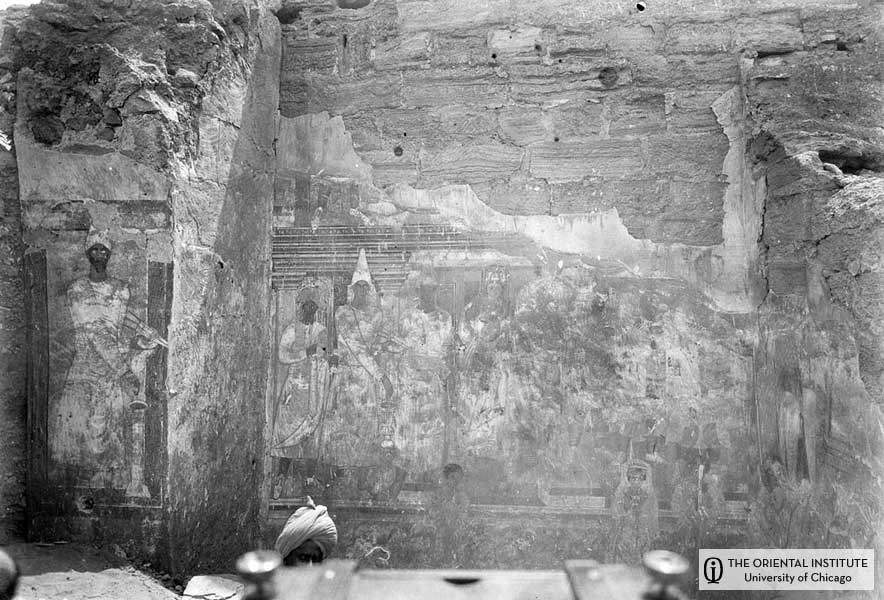 As we drove into Abu Kamal, we passed the two planes on duty here, and the general told me I might go up and have a look at the country if I was interested to do so. Of course I was. We went in to tea, and after I had rested a bit, the general told me the plane would be ready in a quarter of an hour. I also arranged for Luckenbill to go up too. It was a grand sight to look out across a circle with a radius of nearly fifty miles, far into the desolate wilderness of the Arabian desert, with its wide wadis and rocky ridges. We went up only about 2000 feet, and the winding course of the Euphrates, fringed with a narrow line of vegetation and flanked beyond by the desert, was very instructive in exhibiting the topography of the country. When we came down Luckenbill went up and had his joy ride also.

Yesterday afternoon our arabanahs arrived in Abu Kamal, and Colonel Leachman gave them their final instructions about us. He gave me a letter to the Arab governor in Der ez-Zor, Maulud (not Malul, as in my former letters) Pasha. I learn also that the Arab governor of Aleppo, to whom I have a letter from his father in Baghdad, is likewise in Der ez-Zor. Nothing could be more fortunate for our safe conduct from Der ez-Zor to Aleppo. To get us to Der ez-Zor in safety, we must be conveyed through the country of the Arabs with whom the British are now fighting. Leachman sends us tomorrow morning, with a shabana from this fort for about ten miles out, where the last frontier guard post of the British Empire still stands. There Turki Beg (or Bey) will send some horsemen to meet us and conduct us safely up river till we join some horsemen from Meyyadin, the first post in the Arab State. They will take us to Der ez-Zor. I should have stated that Turki Beg is a border friend of the British, who is glad to assist them.

All being in readiness we came up here to Salihiyah (27 miles) this morning, bidding the general, Colonel Leachman, and all the officers good-bye and receiving many friendly wishes for a successful trip to Aleppo. We unloaded our stuff by the mess tent and dismissed the cars which have been with us now for a week tomorrow. I sent back also our servant Abbas, who was sick and took on in his place a man furnished by Colonel Leachman, who will go as far as Der ez-Zor. I had to arrange a lot of transportation, and write a number of “chits” as the Indian officers call a note or written message. Then we went at the paintings. They are in a sanctuary which has a chancel at the west end and an entrance at the east, and has every appearance of being Christian; but the paintings which are exceedingly interesting, do not contain a single unmistakable Christian feature. On one wall is a striking scene showing a Roman officer standing before an altar with fire burning on it, and conducting worship for a group of Roman officers behind him. His name and title have been inserted in Roman letters before his figure by the artist:

If I had a glossary of the thousands of Roman officials now known, it is possible I could find this Julius Terence, Tribune, and thus date the building at once. It must have been built either just before the official recognition of Christianity by the Roman State under Constantine, or during the reversion to the Pagan gods under Julian. For the above group of people are standing before three statues of the Roman Emperors on bases, like the well known heroic figure of Augustus, and also two figures of oriental goddesses, with their names written in Greek alongside their figures. This city with its huge stronghold was a part of the Eastern Roman Empire in the third or fourth century of the Christian Era. The sanctuary was visited by many people, and the painted walls are covered with scribblings scratched in by Greek visitors. I regretted that there was no time to copy all these, for they were in a rapid cursive hand and very difficult to read or copy. I hope I have enough evidence to identify the place. It is an important piece of work which the new Mesopotamian Government have asked me to do here and with the exception of the graffiti scribblings, I have a full record of this sanctuary and its paintings. I set Luckenbill to photographing the paintings on a large scale, Shelton and Bull to making a ground plan, Edgerton also helping, when he was not keeping the catalogue of negatives. I made the archaeological notes on the paintings, and managed to skip around and keep all the other jobs duly inspected also. The result is a large body of full descriptive notes; 24 large negatives of the paintings including each important figure and face on a separate plate; and a ground plan with dimensions of the building. I was thus able to write Colonel Wilson, the Civil Commissioner tonight that I shall be able to send him a full record of the place as soon as the negatives can be developed. I feel very much gratified that we have been able to bring back an important body of new evidence, some of it excavated, like the above scene of official Roman worship, since our arrival on the ground, — new evidence on the eastern history of the Roman Empire on this remote frontier. 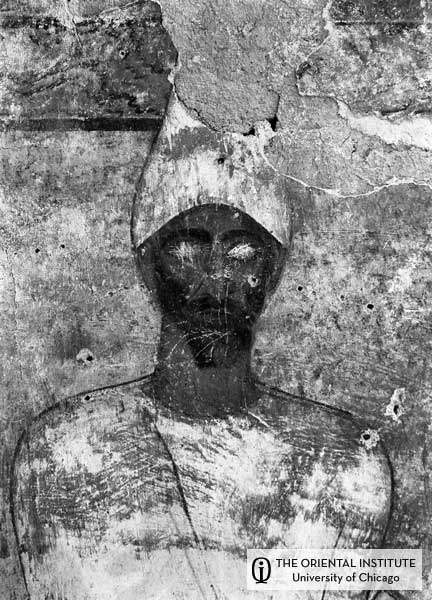 As I was pegging away at the walls, with the wind whirling dust and filth all over me, and my ears, eyes and nose filled with grime, a young officer came around the corner and said, “A wire from below for you, Professor!”. It had come up from Baghdad, been telephoned out from Abu Kamal, and was thus handed to me on the edge of the world in this ancient Roman fortress on the upper Euphrates. I took it and read: “President Judson wires from Washington quote you may draw immediately for twenty five thousand dollars call at Cairo for telegrams end quote”. That was pretty good news, after a day’s grubbing in the filth for the lost story of the past in this great eastern world. I wish President Judson could know what benedictions I called down upon him and continue to do so tonight, as I sit at my little type-writer beside my hard camp bed, while the full moon pushing up the eastern sky sheds a wonderful light over this grand old Roman stronghold. Do read this letter to him, hasty and poorly done as it is. Of course I am writing him, but cannot put all that into an official letter. We start at dawn, less than eight hours from now, and I must get some rest.