The chicken I bought yesterday together with some boiled rice, an omelette and some tinned fruit, made a welcome relief from a day which had been pretty much a long fast. As soon as we could get our field beds put up we tumbled in, and were just ready for slumber when the soldier who brought us to our lodging came up and announced that his chief, the army officer in command of Meyyadin, was below and desired to call on us. I told him we were all in pyjamas, but by all means to bring him up. We found him a very pleasant fellow, much interested in America, and curiously enough, seemed to be rather ashamed of his own land and people. He apologized profusely for the plain accommodation given us, but said it was absolutely all that they had, and laughingly referred to the great hotels of America, which it seemed he had heard about. He complained that his country lacked everything, especially enterprising people, and said he was going to America. He presented me with a picture post card, displaying Haroun al-Rashid receiving the ambassadors of Charlemagne, showed me his commission with his photograph on it, and finally also gave me his card, bearing the name Ahmed Nadji, with a number of titles in Arabic. He said he had telephoned (God save the mark!) to his chief, Maulud Pasha at Der ez-Zor, who would be ready to receive us. He had the good sense not to stay long, and saying we must be tired, gave us a friendly good-night.

The night, however, was as noisy as usual in any Arab town. There is one unbroken hubbub and pandemonium of barking dogs from twilight till dawn. The noise rolls over the town in waves, as one group of savagely barking curs takes it up after another, and if it dies down for an instant it quickly sets in again. I have now accustomed myself to sleep in spite of noise, and to work under conditions I would have thought quite impossible at home. So the barking of legions of dogs does not keep me awake as it did at first. We also had a visit from a large cat who improved the darkness to forage on our provisions. We finally frightened her off effectually and thought we might then enjoy a night’s rest. But a half hour later a soldier began hammering at the door of our house, shouting to wake the dead. We paid no attention and the row continued until I looked out of the window and called down asking what he wanted. He said he was fetching a comrade who was sound asleep in our house, so he kept on pounding and shouting for a half hour more, until he at length roused the sleeper, and we were finally able to get a little sleep.

As we turned out there was a great clatter of horsemen in the street below, and looking out I saw several field guns and a body of cavalry marching down the street. They were going to take possession of the new territory evacuated by the British. Our friend of the evening before was at their head. He looked up and seeing me at the window waved his hand and shouted good-bye in English. Our drivers presently appeared and I ordered the wagons. We had nothing but tea again for breakfast, but nevertheless we were better prepared than before, for I had directed Ali to cook plenty of boiled rice, and had sent our other boy to buy fresh native bread and eggs in the market. Our lunch basket, therefore, contained boiled eggs, bread (and very good bread too is this native bread!), a biscuit tin filled with boiled rice, and a tin of condensed milk. On these we both breakfasted and lunched in the crazy old arabanah. All would be comparatively comfortable feeding in this way, were it not for the myriads of flies. If possible they are more numerous and even more persistent than on the Nile. The evident character of the unspeakable filth in which they have been revelling before they swarm all over one’s food, doesn’t make it any more appetizing. The physicians have now shown that it is due to the flies that dysentery spreads so rapidly in these regions. It is evident of course, how they acquire and carry the infection to the food they crawl over. We have had no trouble thus far, and luckily dysentery is now confined to Baghdad and vicinity.

As we rode out of Meyyadin we found only one horseman to accompany us, — one rifle against five which rode with us yesterday. This one promptly relinquished his horse to our new man Mohammed, while he himself climbed into one of our wagons, and was soon rapturously snoring on top of our bed bags, with his rifle stowed away below! But we felt quite safe. It was a journey of only six hours, some 25 miles from Meyyadin to Der ez-Zor. On our left as we started was a stately Roman fort dominating the hills from the top of a high cone almost filling a bay in the cliffs on our south. The road unfortunately cut off a northerly bend of the river, and hence we were unable to look up the valley of the Khabur River, one of the chief northern tributaries of the Euphrates, for of course it has none on the south where the Arabian desert is. The Khabur valley is very important in the history of Western Asia, for it is fertile and productive. Many of the Hebrew exiles lived here.

Several more horsemen with rifles joined us as we approached Der, and we were quite an imposing procession of five wagons and a troop of armed horsemen as we drove through the market of Der with swarms of children running alongside the wagons and crowds of curious oriental townsmen thrusting their heads out of the bazaars and fairly into our wagons, as they examined both us and our outfit. 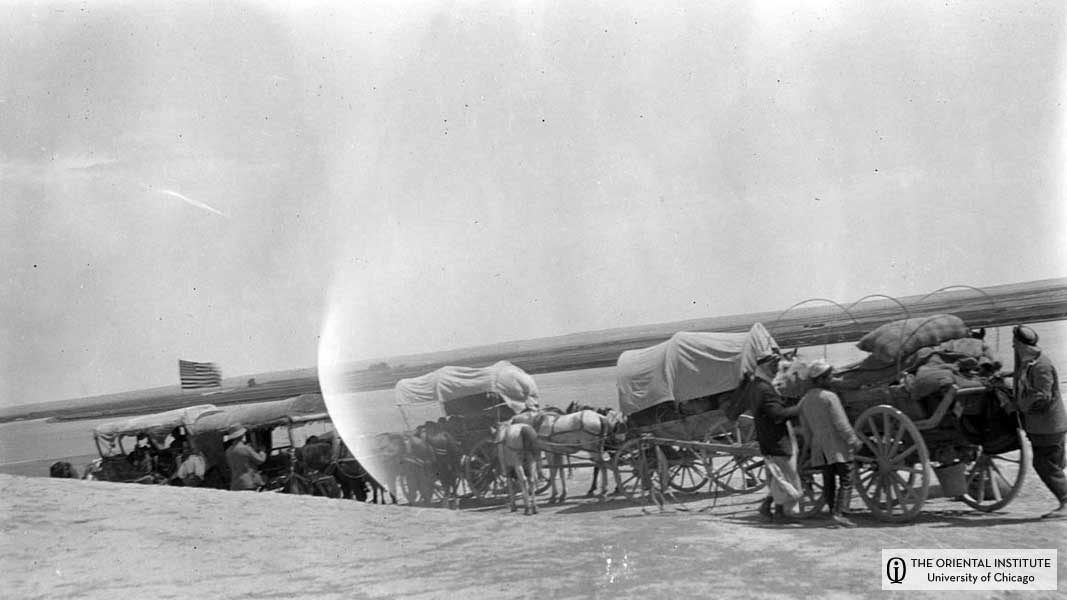 Deir ez-Zor: View above town. Caravan of the University of Chicago expedition en route on road running parallel with the Euphrates at this point. (N. 3299, P. 6859)

We drove to the serail where an officer met us and took my letter from Colonel Leachman to Maulud Pasha, while I was ushered into a waiting room outside his offices. He was not there, and the letter had to go up to his house. After some waiting he sent word down that rooms were ready for us at a hotel(!), but if we did not like them we would be welcome at his house. We went at once to the hotel, while half the town accompanied us. I write now in a funny little room, one of a series attached to the khan. I was hardly settled when an orderly appeared with an invitation from the Pasha to dinner at 7:30.

At the same time poor Ali comes in and says he has lost his cap and also his breeches and sure enough he stands, uncovered both as to head and legs. He asks for 40 rupees to replenish his wardrobe. I run through my accounts to see what we owe him, and finding he has this amount and a little more to his credit, I give him his 40 rupees and he goes off to the bazaar smiling. I have just settled to the machine again when two soldiers bring in a fine looking sheikh with a huge silver-hilted sword. He asks to furnish us with a guard to Aleppo. I ask him if he is from the pasha, and the soldiers tell me he is not. I tell him I must see the pasha before I can make any such arrangements, and the sheikh goes out, very sore and angry. This starts one’s imagination of course. Where does the old villain live and will he be on the road waiting for us? But of course I could not offend the Pasha by going around him and employing a guard furnished by someone else, and having nothing to do with this figment of an Arab State!

Meantime I must also find and call on Suwedi, who is really here, and as he therefore will not be in Aleppo to help us one our arrival there, I must secure some kind of a letter from him to use in Aleppo. But the question of etiquette arises. I must not call on Suwedi first.